June 11, 1870
Liverpool has now another recreation ground in Stanley Park, of which we give an illustration; and yet another- Sefton Park – is being laid out. But a large and busy town like Liverpool can scarcely have too many of these fresh breathing places where men can rest and enjoy themselves away from the noise, and smoke, and dirt, and the wearying toil of money-making of their work-a-day life, and where all the green grass and bright flowers look all the greener and brighter for the contrast with the stony streets and smoke-grimed houses, the wearisome monotony of  brick and paving-stone of which thriving towns are formed.

There have been men who preferred the austerities of brick and mortar to the greenest of lanes and breeziest of downs, but they were always exceptions to the rule of human nature, and the species, we take it, is pretty nearly extinct. The hardest money-grinder now has his country villa wherein to sleep of nights; the most prosaic of mortals who can afford it takes his annual trip to the sea side, ot the mountains, or the lakes, not to mention an occasional raid upon nearer-lying districts, where he may break the monotony of his life by a few hours’ pure air; and it is a blessing to man, woman, and child to be able to step across the street, as it were, in among trees, with a stretch of blue sky above.

It is true we cannot import the country, pure and unadulterated, into the midst of our cities; but we can do the next best thing – we can civilise her into parks, enclose her, bedizen her with flowers, restrain her natural graces within becoming limits, and put her under rules and bye-laws. Even sophisticated, she is charming.

This latest addition to the country cousins who have come to town was opened to the public on the 14th of May by Mr. Joseph Hubback, the Mayor of Liverpool. The proceedings commenced with a luncheon at the Town Hall, given by the Mayor to the Lord Mayor of Dublin, the Corporation of Liverpool, and other gentlemen, to the number altogether of about 100. Luncheon concluded, the company departed in carriages to the Anfield Lane entrance of the park, where they were formally admitted by Mr. Alderman John Weightman, the chairman of the Improvement Committee, and proceeded to the terrace, to which those who had been favoured with tickets had previously been admitted.

There were between thirty and forty thousand visitors, among whom where the children of several charity schools who had come in state with banners and music. The Mayor then addressed the company, declaring the park to be open; and Mr. Councillor Stitt and Mr Councillor Woodburn having also spoken, the formal ceremony terminated, and the company were at liberty to inspect the beauties of their new pleasure-ground. This has been laid out with great taste by Mr. Kemp, landscape gardener, of Birkenhead, and contains a piece of water, shrubberies, and a terraced walk. The land, is at the north end of the town, and stands very high, affording a fine view all round. The total cost is estimated at 120,000/.

On Whit-Monday a Fancy Fair and Bazaar were held in the grounds in aid of the funds of the new Stanley Hospital, the first stone of which was laid by Lord Stanley the same day. An account of this ceremony will be found in another column.
(The Graphic: June 11, 1870) 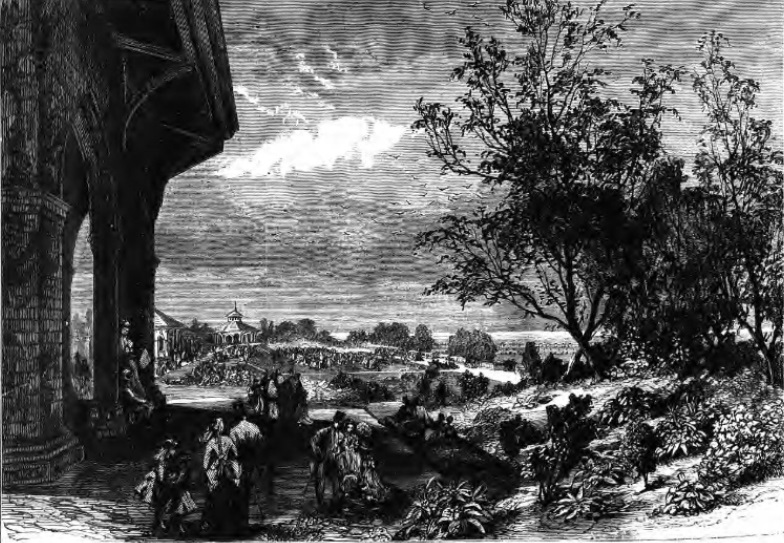