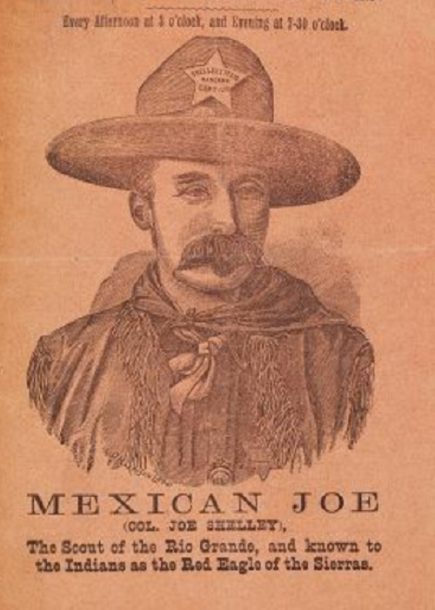 August 12, 1887
Colonel Joe Shelley – or to give him his more familiar title, “Mexican Joe” – with his band of cowboys and Indian allies, arrived in port on Wednesday, by the National steamer Italy, and yesterday was escorted to the Exhibition, which will be the “happy hunting ground” of his troupe for some time to come.

The arrival of this famous frontierman has been heralded with loud flourishes by the Exhibition authorities for several weeks past, and the Liverpool public, as their demeanour showed yesterday, evidently took the keenest interest in the visit of this remarkable personage and his companions.

The Exhibition Council were apparently intending to take things quietly in the matter of introducing the arrivals to the exhibitors. They claimed to have a stake in the enterprise, and with the competence of the Exhibition authorities organised a demonstration for yesterday, which served the double purpose of giving the visitors a hearty welcome, and of bringing them directly under the notice of the inhabitants.

At midday about a dozen vehicles, headed by a waggonette containing the St. George’s Industrial School-band, and accompanied by a number of the officials and leading exhibitors, left the Exhibition for the Alexandra Dock, where the Italy was lying. A crowd of several thousand persons gathered at the dock, and when Colonel Shelley and his party made their appearance they were greeted with loud cheers. Taking their seats in the various carriages, the visitors were driven amid flying colours and to the music of the band through all the principal thoroughfares of the city, from Bootle to Toxteth.

Everywhere they aroused the greatest enthusiasm – an enthusiasm, however, perhaps born on curiosity. The appearance of the colonel and his cowboys, with their broad sombreros, and the bold, careless expression of their swarthy features; of Black Hawk, the Sioux chief, in his paint and feathers; of his followers, and the meek-looking squaws in their gay trappings, made up a picture, indeed, of striking effect, and one entirely new to Liverpool, Mexican Joe himself, by the extra gorgeousness of his attire, and his distinctions, was quickly singled out by the spectators; and all along the route he had a bodyguard of youths – some of them hanging on to the back of his carriage – who seemed never to tire in their eagerness to view the redoubtable Texas hero.

At the Exhibition a reception was given, and the colonel was welcomed by several members of the Executive Council. A camp is being erected in the grounds of the Exhibition for the strangers’ use. It is the hope of the council that the first performance of the troupe – who will always appear in the quadrangle in front of the band stand – may be given on Saturday; but it is stated that in any case this interesting event will take place on Monday.

The party brought by “Mexican Joe” numbers about 30 persons, and includes cowboys – some of whom are called by the delightfully suggestive names of Texas Jack, Lasso Mack, California Frank, Suspender Jack, Buckskin, Nevada Fred, Colorado Charlie, and Arizona Pete – and a party of Indian warriors and squaws, under Black Hawk – a Sioux chief famous for his scalping achievements. A number of mustangs and bucking ponies have been brought from America for the better illustration of the scenes the troupe are to enact.

The programme seems to include everything that will illustrate life on the prairies and in the Far West generally. This, we are to have an attack on a stage coach – and a stage coach, too, that is said to have figured in many a real attack such as is to be here pictures – the pursuit of and fight with Indians, throwing the lasso, catching wild horses and cattle, riding wild mustangs, races between cowboys and Indians, Indian war dances, scalp dances, and many other items.

If the show is half as good and interesting in reality as it appears on the programme, it ought to greatly advance the interests of the Exhibition. As to “Mexican Joe” himself, if the stories of daring and of skill told of him be true – and we have no reason to doubt their accuracy – then the fancifully drawn Western heroes of Captain Mayne Reid, Fenimore Cooper, and other novelists pale before him. It is stated that he received the title of colonel for his services to the Government of the States in helping to exterminate the bands of Indian marauders in Arizona and New Mexico.

He is the chief of a band off cowboys who recently held a convention in Chicago. In 1878 he received a commission from General Algeria to hunt down a band of Apache Indians, and his services on that occasion were also recognised by the States. He is described as “the most famous of Texas rangers” and the “greatest running shot” in the world; of his powers in this latter respect we are to receive proof at the Exhibition.

Whilst living on his ranch, in Northern Chiuahua, in the Janos Valley, Mexico, in 1880, his wife and children were slaughtered by Apache Indians out of revenge for his active operations against them two years previously. Organising a band of cowboys, he followed the trail of the Indians through their mountain fastnesses for eight months, and, coming up with them, slew their chief Victorio in single handed combat. In face of such a catalogue of brave deeds as he is credited with, the desire to see him will no doubt be great.
(Liverpool Mercury: August 12, 1887)