January 23, 1892
Although there has been a temporary lull in the agitations caused by the “split” which took place a few months back between the members and committee of the Everton Football Club, and their landlord-president (Mr. John Houlding) over the question of rent and purchasing of ground, the matter itself has not been allowed to drop by those chiefly connected with the affair.

It will be recollected that a sub-committee was appointed to interview Mr. Orrell, the owner of the adjoining land to the now rented by the club from Mr. Houlding, also to “see and report on other grounds,” &c”

It will also be remembered that Mr. Houlding promised to draw up and submit to the members a proposal to work the club on the “Limited liability” principle.

For the purpose of considering the sub-committee’s report, and also the advisability of forming the club into a company on the basic set forth in Mr. Houlding’s prospectus, a meeting of members has been called for Monday next, at Colleague Hall, Shaw-Street, at half-past seven p.m.

It will be remembered that at the last meeting held Mr. Hounding gave the club notices that their tenancy of the ground now rented by them would expire at the end of the present season. The sub-committee’s report is as follows:-

“We saw Mr. Orrell, and he is willing to sell the portion of land referred to at 7s 6d per yard, and he further stated that he is prepared to take any lower price that Mr. Houlding will be willing to accept for his land. He is also prepared to accept £100 per annum as rental, and to give up a lease to run concurrently with any lease which Mr. Houlding may give for his ground. Mr. Orrell is willing to give the club ownership in any erections put on the ground.”

As to other Grounds –
The ground in Goodison-road, at the top of Spellow-lane, may be acquired on lease for any period from seven to twelve years at £50 annum.

The owners are willing to give the club the option of purchase, but the price is not fixed yet.

All errections put on the ground would be the property of the club.

The ground is about 300 yards by 200 yards, and the club take any portion required.

There are two sewers at either end of the ground, 12 feet deep at one end and 13 feet deep at the other end, so that there would be no difficulty as to drainage.

The ground in Lower Breck-road, about 100 yards from Breckfield-road at present used by Walton Breck and other football clubs is offered on lease for twelve years at £100 per annum, the club having the option of purchase at 5s 6d per yard, all errections to be club’s property.

In addition to the land, we are offered a large house adjoining the ground, tenant of which is about to leave.

This house would be suitable for dressing-rooms, offices, and club house for members.

We have received an estimate of the cost of removing and rebuilding the erections from the present ground to either of the above grounds, including drainage of new ground, the cost being £330.

The sub-committee, at the request of the special committee, had an interview with Mr. Houlding, who after consideration, has replied as follows: –

“With regard to the rent I am willing to accept, I believe that the land in Walton Breck-road will always be wanted for when we consider that 10,000 people leave the ground at that end in about ten minutes, you must have room for them to spread out.

“But if I should sell the land outside the boundary, of any portion thereof, at any time during tenancy, the rent will be lowered proportionately. I also reserve the right to nominate one member on the committee. I am also willing a lease, with the usual landlord’s condition’s inserted, so the portion required for enclosure for that period of ten years.

“Rent to be paid quarterly in advance. The tenants to have the option of purchase of the land that is used at present and enclosed at 7s 6d yard, such purchase to be arranged between now and the 30th of April, 1894.

“The purchase to include all fast and loose fixtures, boundaries &c, that may be on the ground sold at that time. I am also willing that a company be formed (on conditions as per enclosure prospectus). Of course the notice to quit holds good.” signed – John Houlding.
(Liverpool Football Echo: January 23, 1892)

A John Houlding sketch (from LFChistory) 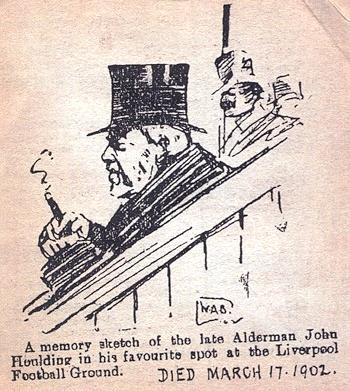