January 30, 1892
Considerable surprise was expressed by the members of the Everton Football Club upon proof being obtained that a company had actually been formed with the title of the “Everton Football club and Athletic Grounds Company, Limited.” Which was registered in Somerset House, on Tuesday last, and to the articles of association, of which the signatures appended are Albert Edward Berry, William Houlding, Alex Nisbet, John James Ramsay, John Dermott, William Francis Evans, and John McKenna.

The capital is to be £15,000 in £1 shares, and the company are to be continue using Mr. John Houlding’s ground for football, &c, as its name indicates. Looking at the who proceeding, it was remarked that while the general meeting of the club’s was being held on Monday night, the papers for registering the new company were already in London, seeing that they were registered the next day.

The effect of the formation of the company was the subject of general discussion amongst almost all classes of the community. Some contended that it would alone be entitled to be known as the Everton Football Club, while the vast majority contended that this was a point which ought to be strenuously disputed by the members and their committee who are busily engaged in carrying out the resolution of Monday night to seek for a ground elsewhere.

Those who are fully acquainted with the rules of the Association and of the League urged that these two bodies would have to recognised the new company as the “club” before any play could take place under auspices with any other club connected with them, and there be some doubt that the committee will take immediate steps to represent the present conditions of matters officially to both the Association and the League authorities.

It was found out that if the new company should succeed in being accepted into membership with the Association and the League, the dividends must under their rules be limited to 5 per cent, that being the utmost allowed in order to preserve the purely sporting and athletic character of the football.

Any profits made admitting a dividend above that amount are to go to a reserve fund or to be spent in the interest of the game. It is necessary to understand also that the Association is “a law into itself,” and so is the League; and there can be no such thing as compelling either the one or the other to recognised any club or organisation of which it does not approve.

Of course it is impossible to predict the course which may be taken by the two great authorities named but it is quite certain that the Everton Football Club, through its circumstances, will leave nothing undone to maintain its own and will dear to the new company any right to lay claim to a portion of the title which they have assumed.
(Source: Liverpool Football Echo: January 30, 1892) 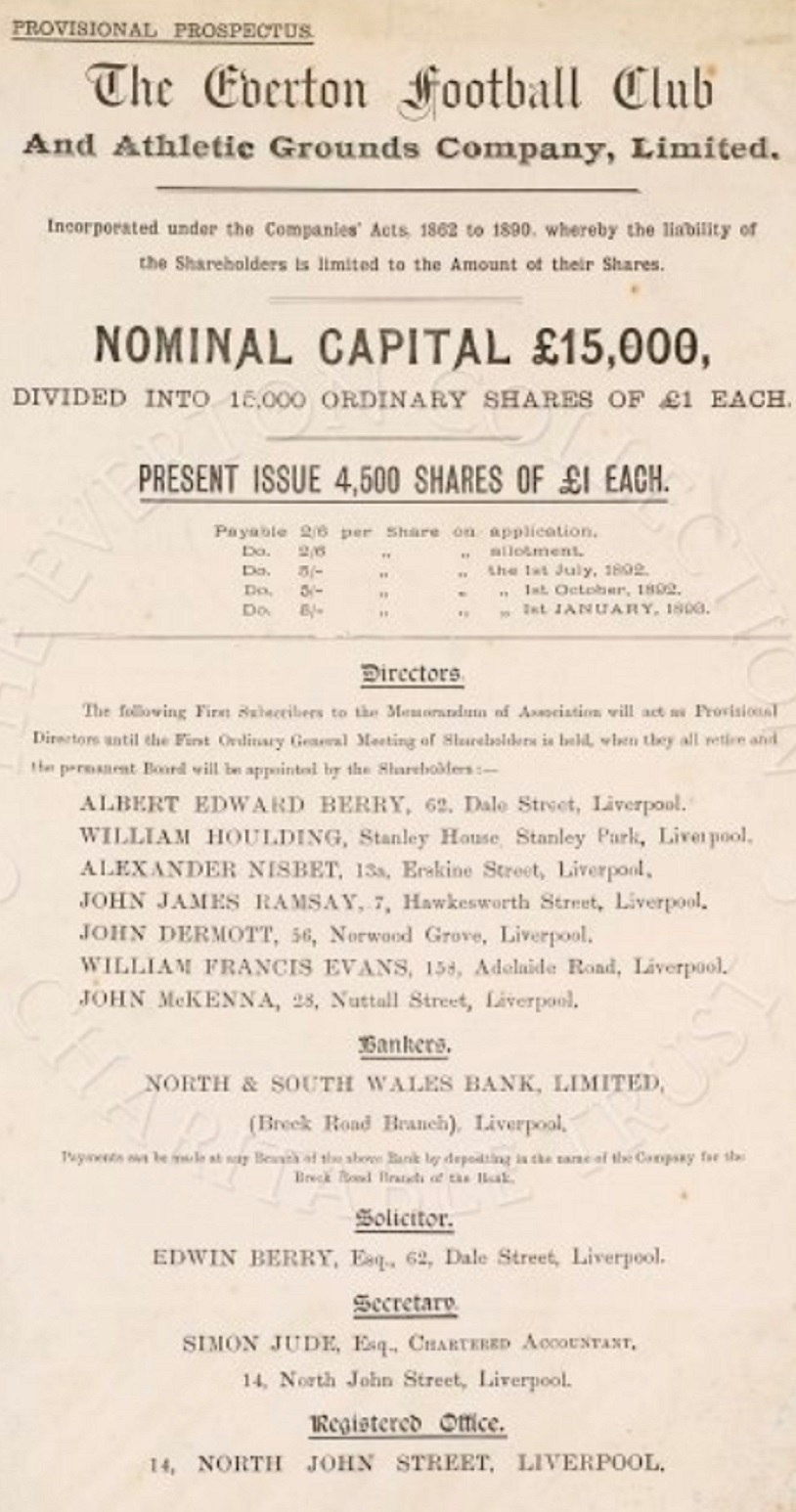