April 2, 1892
The new Liverpool Club is going on flourishingly. They have as many members as they want enrolled, with a large string of applicants for both membership and as subscribers. There will be two classes of the latter, viz., 7s. 6d. per annum for the open stands and 15s for the enclosed. Twenty one first class players have already submitted to the new club offers of their services. This looks healthy for good football at Anfield Road. The question of affiliation will be a mere matter of form at the next meeting of the Association. Then the question arises, where are the fixtures to come from?
(Source: Cricket and Football Field: April 2, 1892)

The season ticket for 1892-93. The image and more about the formation can be found here. 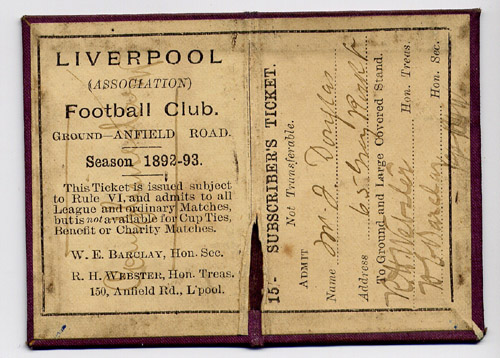