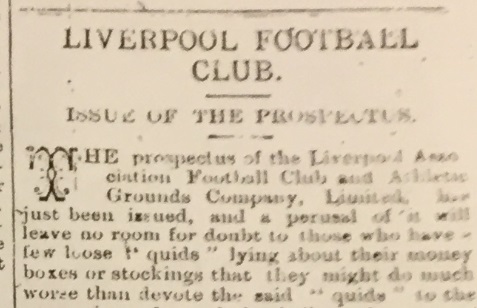 June 27, 1892
The prospectus of the Liverpool Association Football Club and Athletic Grounds Company, Limited has just been issued, and a perusal of it will leave no room for doubt to those who have a few loose “quids” lying about their money boxes or stockings that they might do much worse than devote the said “quids” to the promotion of good football and personal profit.

At first sight the amount of capital (£15,000) may appear abnormal, but those intending to invest will see from the way in which the shares are issued and the considerations made by vendors of the property that the risk is infinitesimal. In the first place the present issue is confined to 5,000 shares of £1 each, to be called up in four amounts by the 1st January next.

Mr. John Houlding will sell the present ground, containing 9,700 yards for 7s. 6d. per yard, and adding to the amount required for the purchase of these, the cost of all the fine erections, the total cost will be £92,37 10s. Mr. Houlding has agreed to leave £2,700 on mortgage of his land, and Mr. Orrell £2,300 on mortgage of his property, each at four per cent, per annum, so that the purchase of the whole will be at once completed and a balance of £762 10s will remain as working capital.

It is pointed out that if football and athletic sports are patronised as hitherto, the shareholders will not only be able to pay interest on mortgages (£200 per annum) but that £800 per annum will be wiped off the mortgages, and sufficient money left for a dividend. Thus, at the end of six years, the shareholders will be in possession of a ground the capacity of which will form one of the finest enclosures in the country.

It may be noticed that, unlike other football ventures which may be in the mind of the readers, the ground in this case will not in a few years revert to the original owners, but will for the absolute freehold property of the club for all time.

Considering all these points, one cannot fail to see that the prospectus of the new club is of the highest description, and it can scarcely fail to prove a great success.
(Source: Field Sports: June 27, 1892)