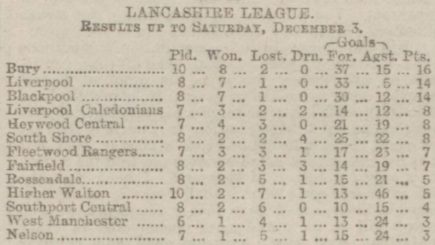 December 3, 1892
Key note: “Liverpool gave as fine exhibition of football on Saturday last as any one might wish to see. Their play was similar, but in much less degree, to the best days of North End. As opposed to most of the leading clubs, who now foster wing play, the Liverpool forwards make most of their game in the centre of the field. John Miller, with his two clever supports, Malcolm McVean and Jock Smith, gave at times so really capital displays, and as they all are deadly shots they are veritable triumvirate.”
(Source: Liverpool Mercury: December 5, 1892)

Relevant articles:
* Athletic News: “The heights and weights of the Liverpool players”;