Saturday, June 15 – 1901
We have been favored with a copy of the sports programme of the Vale of Leven Highland Games, which took place on Saturday. It is an interesting booklet and gives sketches of famous Vale of Leven athletes and their records. We cull the following, which may be of interest locally: –

“Andrew Hannah, at Renton Games in 1886, won first prize for hop, step, and leap – distance on level ground, 47ft. 9in. At Coalburn Games, in the following year, he was first with 47ft. 7ins., level ground. At Tullietudlem Games, springing from behind a board, he made 48ft. (first try), and at the committee’s request, attempted to clear 59ft., but tripped and injured himself.

“At Dumbarton Castle Grounds he did 46ft. 10ins. His best long jumps were made at Renton, (20ft. 10ins.) and Coalburn (20t. 9ins.). Standing jump, 9ft. 7ins.; standing hop, step, and jump, 29ft. 7ins.; hitch and kick, 8ft. 7ins. Whilst in football outfit he often kicked the cross-bar of the goal-posts. He carried off all the jumping events at Everton and Liverpool Games for years, and in a 150 yards handicap there, off 5 yards, ran second to Fred Geary, the Nottingham flyer.

“He was tied to jump Tom Burrows (hop, step, and leap champion of the world) but the stakes were withdrawn. He won a bowling tournament of the Liverpool Club, was in the first three in several billiard handicaps; could putt a 16lb ball 33 feet, and pole vault 9 feet.

“Hannah also had the great honour – the lustre of which he did not tarnish – of captaining the famous Renton Football Club when they won the championship of the world. He captained the renowned Everton club when they won the English League Championship, and was for three years’ captain of the formidable Liverpool F.C. Whilst in the latter city, Hannah accepted the challenge of the proprietor of a travelling menagerie to enter the den of lions. His reception was quite friendly. A gold medal was his reward.
(Kirkintilloch Gazette, 22-06-1901) 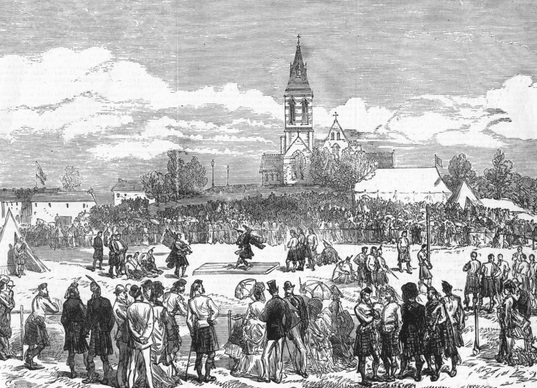