April 2, 1902
All eyes will be turned towards Ibrox Park, Glasgow, on Saturday first, when Scotland and England meet in their thirtieth International game. The most remarkable feature of International football is the ding-dong struggle annually witnessed between Scotland and England. These teams are really the giants of the football world, and this week’s contest is expected to be a close and exciting one. Surprises are shown in both elevens, and speculations has been rife during the past week as to how the new hands will perform. Great preparations have been made for an enormous crowd at Ibrox Park, and already the demand for tickets to the reserved stands has exceeded the expectations of the officials. Special trains are being run from all parts of the country, and the scenes at Glasgow railway stations in both the early part of the day and in the evening should be really picturesque. 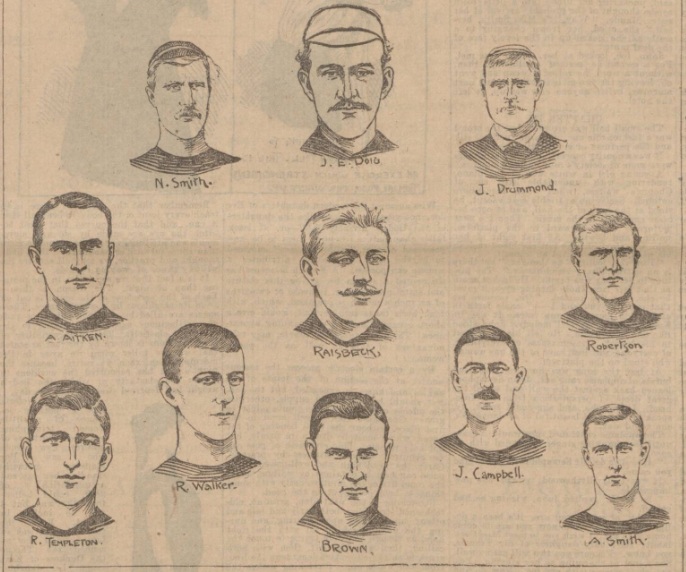 Scottish Players:
Ned Doig (Sunderland).
Let us hope Doig will acquit himself well on Saturday. Ned was one of the surprises of the team chosen. But he may again rise to the occasion, as he did on his last appearance in an International in Glasgow. A career such as Doig’s is something to be proud of. Thirty-four years of age, and a lative of Letham, in Forfarshire, he commenced playing football in 1883 for Arbroath, made a great name for himself, and, like many others, was induced to go South, first to Blackburn, and then to Sunderland, which latter place has indeed found a home from home. He was chosen to represent Scotland against Ireland in 1887 and 1889, and his ambition was realised when in 1896 he held the fort against England at Celtic Park, Glasgow, and helped his side so much towards their victory of two goals to one that he was “chaired” off the field. It is said that on that occasion a hero worshipper begged for a lock of the warrior’s hair. For purely natural reasons, however, Doig had to decline – regretfully. IN 1897 he was again chosen in the big match of the year, but his club were in such difficulties – fighting for their very existence – that he preferred to assist them. He had the dual satisfaction of helping Sunderland to win and of hearing the same night that Scotland had gained the day without him. In 1899-1900 he should again have been between the Scottish posts at Glasgow, but Sunderland this time had a chance of the League championship, and he went to Sheffield instead. Alas! This time Scotland and Sunderland both hit the dust.

Apart from this it says something for a man’s consistent good form when he plays for his country in 1887, and is asked twelve years afterwards. They will tell you in Sunderland that Doig’s goalkeeping alone has made all the difference between winning and losing time and oft. A total abstainer, he is a pattern of the professional footballer, and as an example to others one such man in a club is a treasure. We believe he has only missed about half a dozen League matches during the whole time he has been at Sunderland. No wonder, then, they think so much of him there. Loyalty like this his club could not pass over without showing some tangible proof of esteem, and three years ago Doig and Hugh Wilson were each other presented with a silver tea and coffee service. As a man and footballer Doig is “one of the very best.”

John Drummond (Glasgow Rangers).
Is a more powerful back than his club-mate Nick Smith. In their best form these two make perhaps the best couple of defenders in the Kingdom. Drummond does not hesitate to tackle opposing forwards in club matches, but in International games he is as clean and honest a player as could be found. His previous caps are: Against England, 1895, 1896, 1898, 1900; against Ireland, 1892, 1894, 1895, 1896, 1897. He originally came from Falkirk.

Andrew Aitken (Newcastle United).
Is undoubtedly the right man in the right place. Originally a centre half, he can play with equal success at right half, and had no difficulty in being capped. He is as sharp as a needle, and plays a gentlemanly and intelligent game. Standing 5 feet, 8 inches in height, he weighs 11 stone 8lbs.

Alex Raisbeck (Liverpool).
is a speedy and resourceful half, of good height and build. His commanding figure at centre causes opposing forwards to respect him, mad rushes being of little avail. Looked upon as the best centre half in England by most judges. Previously with Hibernians and Stoke. Third cap. Is 5 feet 9 ¾ inches in height, and weighs 12 stone 9 lbs.

John Robertson (Glasgow Rangers).
Like his club-mates, Nicol Smith and Drummond, is an International favourite. Coming as an Anglo-Scot, he was spotted right away for International honours. This was in 1898, and since then he has never been out of the Scottish team against the Rose. He saw service with both Everton and Southampton, and played as an Anglo-scot while over the Border. Early in the season he had the misfortune to get injury to his eye, and has not had the same opportunities for showing off his true form. He has also proved of service as a forward.

Robert Templeton (Aston Villa).
Is the only first-class player for outside right. Standing 5 feet 9 inches in height, and weighing 11 stones, he commands remarkable speed, and can shoot with splendid judgment when in form. Scotland is badly in need of a good right-winger, and it is hoped Templeton will be a success.

Robert Walker (Hearts).
Requires no introduction to the football community. His name is a household word among followers of the winter game. During the past two years Walker was a most conspicuous figure in the ranks of the Scottish eleven against England. In 1900, at Celtic Park, Glasgow, he played inside right to the famous John Bell, and gave that celebrity any number of chances, but he was not able to take full advantage of them. It became necessary to discover a new outside right for Scotland, and the Selection Committee decided to utilise Walker in that position at the Crystal Palace on March 30, 1901. Their bold policy was completely justified, for Walker quite divided the honours of the attack with Alex Smith, the left winger. Walker, who was born at Edinburgh in 1879, learned his football in the Scottish capital. The Heart of Midlothian has been his only senior club, and to this organisation he has been exceedingly loyal. Possibly Walker played the grandest game of his career for the Hearts against the Celtic in the final tie for the Scottish Cup in the spring of 1901.

He has assisted his country against Wales and Ireland, and has taken part in several inter-League matches. Blessed with a nice turn of speed, he has great command of the ball, and is a grand shot. He stands 5 feet 8 inches, and weighs 11 stones 7 lbs.

Alex Brown (Tottenham Hotspur).
Was the sensation of the selection. A swift, dashing centre forward, he is always to be considered dangerous when anywhere within shooting range. It is undoubtedly as a prolific goal-getter that Brown obtains his cap. He was born at Glenbuck, in Ayrshire, 23 years ago, and played with Preston North End before joining the Hotspurs. He is not by any means a great pivot, and is not to be compared with Campbell of Celtic. Brown may, however, surprise many of this side of the Border. He stands 5 feet 9½ inches, and weighs 11 stones 2 lbs.

John James Campbell (Celtic).
Should suit Alex Smith well on the left wing. A worthy veteran, he can still hold his own in the best company, and in any position forward. He was supposed to have broken down two seasons ago, but turned up in Birmingham, and for Aston Villa proved the best centre forward in England. He figured mostly along with Alex “Sandy” McMahon, but was partner for Walker on the right against England last season. Campbell stands 5 feet 8½ inches in height, and weighs 12 stones. He has figured versus English Association in 1893, 1898, 1900, 1901; versus Welsh Association, 1901; versus Irish Association, 1893, 1898, 1900, 1901, and 1902. His League caps are versus England 1893, 1900, 1901. He has not played versus Irish League.

English Players:
Billy George (Aston Villa).
Is a magnificent custodian. He has done excellent service for the Villa, and has won his place on his merits. He is nimble and active in goal, and, used as he has been to all kinds of shots from the English “sharp shooters,” he should give a grand display at Ibrox. George is a well-known English cricketer, and plays for Warwickshire.

Bob Crompton (Blackburn Rovers).
Is a back who has been steadily improving all the season, and he is worthy of his place.

George Molyneux (Southampton).
Was at one time in the Third Grenadier Guards, where his football abilities were first recognised in the regimental team. A strong kicker, he is also sure in tackling.

Albert Wilkes (Aston Villa).
Though short of stature, is game to the heels, and has a big reputation in the Midlands. He works like a horse, but is thoroughly gentlemanly in his tactics. This is his second successive cap against Scotland. Stands 5 feet 8 inches in height, and weighs 11 stone 8 lbs.

Frank Forman (Nottingham Forest).
Better perhaps at right half, where he plays an ideal wing game with the men in front of him. England’s weakness, however, keeps him in the centre, and his speed and length of limb stand him in good stead. Has played for Derby County as an amateur, being Derbyshire born, in fact. 5 feet 11 inches; 12 stone 7 lb. Previous caps, 1898, 99 and 1901.

Albert “Kelly” Houlker (Blackburn Rovers).
Is the weakest of the three half-backs. He is merely a club player, and Templeton has often had much the better of him. Houlker will require to show much more improved form to be of service in the International.

Billy Hogg (Sunderland).
Along with Steve Bloomer should make a first-class wing. He understands the Derby County man’s play to a nicety, and ought to be a thorn in the side of Robertson and Drummond.

Steve Bloomer (Derby County).
Still a meteoric player. Though born at Cradley Heath, which is within the borders of Staffordshire, is practically a Derby man, and he went from a lads’ clubs into Derby County team ten years ago. 5 feet 7 inches; 10 stone 12 lbs. Capped also in 1895-7-8-9-1900, and 1901. Bloomer captains the English team.

Billy Beats (Wolverhampton Wanderers).
Played formerly for Burslem Port Vale. He should have been honoured by Selection Committee long before he was. His work is of the unassuming kind, and perhaps does not come under the notice of the ”powers that be” so much as more brilliant men. He stands 5 feet 6 inches, and weighs 11 stone 6 lbs.

Jimmy Settle (Everton).
Has been playing remarkably well for his club this season, He is a clever inside player and should prove a capital partner to Cox, on the left. Settle is a dangerous “shot”.

John Cox (Liverpoo).
Was well in the running for his cap against Scotland last season, but could not displace Blackburn, who was one of the youngest of the team. Cox is fast, but too much inclined to indulge in trickery against a weak opponent. A Liverpool-born man, but gained his experience at Blackpool. Stands 5 feet 9 inches; weighs 11 stone 7 lbs.