November 17, 1902
Amongst the numerous official positions which the League system has brought into being and importance is that of trainer to our leading organisations. Success on the field can easily be achieved by players who are physically fit, hence the responsibility attaching to the man whose duty it is to prepare the team for all engagement. Of those at present thus employed throughout the country, few can boast a record equal to that of James Chapman, of Broxburn, as he is more familiary known, who for the past four years has acted as trainer to Liverpool.

His career, from boyhood, has been connected with athletics, and in his time he has performed valiant deeds on the running-track. In early youth, he displayed a fondness for running and hurdling, and played a prominent part in the highland games and other festivals in the Edinburgh district. Before reaching 17, he won the Half-Mile Flat Race at Broxburn, as a professional, which was but a prelude to some striking successes gain during the following eleven year.

In 1876 he secured the Mile Flat Handicap at the Powderhall New Year’s Festival, whilst the following year he gained second position in the same race. On two or three occasions after this he was runner-up in this professional event.

Chapman turned his attention to hurdling, and boasted no superior for several years over 300 Yards and upwards. At Inverness, he won the 600 Yards and 300 Yards on several occasions. From this to sprinting was the next change, and at Powderhall, in the 130 Yards £100 Handicap, he obtained third position, thus proving himself a most versatile athlete. It may interest Liverpool readers to know that Chapman disported himself on the Stanley track two or three times, and scored victories at Chester and Llandudno, in the old days.

In 1885, he first became acquainted with a football team, and has ever since been in touch with devoters of the dribbling code. After a year’s connection with Cowdenbeath he undertook similar duties with Broxburn Thistle and in 1887 had charge of the Dumbarton team. For eight years he remained with this club, during which he helped forward the acquisition of several notable triumphs, and such players as McNaught, Miller, Dewar, Madden, J, Bell, L. Bell, Alex Latta, Jack Taylor, Abe Hartley, J. Hartley, all came under his guidance. But Dumbarton was the happy hunting ground for English and Scottish agents, with lamentable results to the “sons of the rock” as a club.

J. Wilson, who now trains Glasgow Rangers and H. McDermott, former trainer of the Hibernians, and their present one, Canning, were all coached by Chapman, and with Dumbarton’s resources almost drained dry, the Broxburn athlete migrated to Edinburgh in 1896 to assist the “Hearts”.

For three years he continued the work of developing the prowess of would-be champions on the running track and the famous Edinburgh club won the League Championship twice during this period, the Scottish Cup, Rosebery Charity Cup twice, and the East of Scotland Championship – not a bad three years’ work. Amongst his notable pupils during these years was Knowles, who won the Newcastle Christmas Handicap.

In 1898 he was induced to cross the border and begin his connection with the Liverpool club, which has continued up to present. Smoking and drinking have never been weaknesses of Chapman’s “the weed” being absolutely tabooed, and a glass of wine very occasionally the extent of his liquid nourishment.

He has seen the Anfielders carry off the League Championship, and reach the semi-final stage in the English Cup, and is not without hope of still higher honours. With a record like that which we have sketched, no wonder the ambitious footballer listens to the golden hints of such a practical authority with a conscientious endeavor to fulfill. The present Liverpool team does credit to its mentor. Himself a fine specimen of a jumper and runner. Chapman takes a keen interest in the young and at the Elementary Schools’ Sports, which are annually held on the Anfield ground, he shows a keen interest in the contests. 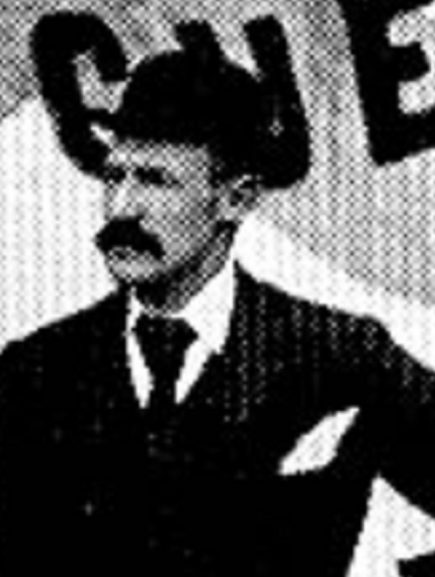