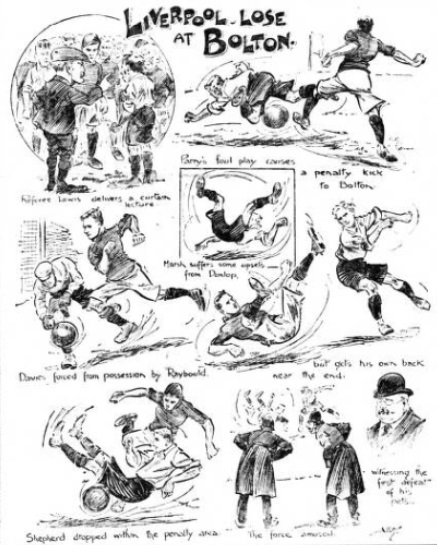 December 5, 1904
I had not seen a Second League match this season prior to Saturday, but various friends had been good enough to inform me that Liverpool stood in a class by themselves, and that Manchester United and Bolton Wanderers might fight it out between themselves for second position. But the Wanderers had views of their own on the subject, their opinion being that the best club in the Second Division has its headquarters at Bolton, and intended to give a proof of their contention on Liverpool’s visit to Burnden Park, which happened to be on Saturday.

Of course, Liverpool, for their part, desired to equal their 1893-4 record of going through the campaign without a defeat, and Mr. Tom Watson told me that if Bolton did win, which naturally he doubted, his team would be beaten on their merits, for the players could not possibly be in a better condition e’en though they were playing the Cup Final. The Wanderers were also ripe for the anticipated stern contest, having dined together at the club’s headquarters during the week.

Naturally the match created considerable attention throughout the country, heavily laden trains helping to increase the number of enthusiasts from the Bolton district, with the result that 27,824 actually paid for admission, apart from members, a record attendance for a League match at Bolton.

I never saw the railway embankment better packed, and though the crowd broke down the rails in several places it is pleasing to record the fact that no one was seriously hurt. One boy certainly did receive the attention of the big-hearted trainer of the Wanderers, Jack Lewis, but, bless you, he felt as proud as a king when he was led across to the reserved stand to occupy a seat among the gentry. And, by the way, the match was graced by the president and both vice-presidents of the League. Mr. John Lewis, of course, officiating with the whistle.

The players, however, were not afraid of the prince of referees, and it perhaps was as well that a weak man was not in the centre. The men charged at each other on the knock-out system, and tripping was part of the game. At last the players were called together, the goalkeepers excepted, to receive an official admonition, but this was in the second half.

Dunlop was rather foolish to begin the deliberate violation of the laws, for the game was quite young when without any necessity to do so he whipped Stoke’s legs from under him. Thenceforward the crowd gave Dunlop no peace, and Marsh taking up his partner’s grievance hammered away at the back all afternoon, and I am afraid that neither player would be very anxious to rise before the streets were aired on Sunday morning.

But, for all that, though the trainers were several times called upon to bring forth the magic bottle, the whole of the 22 players were able to walk off the field at the finish, tired and worn undoubtedly, but not halt, maimed, or blind.

Those accustomed to watching First League games would doubtless describe Bolton’s start as a mad rush. But there was method in the apparent madness. The idea was to take their more refined opponents by surprise and capture their goal, and then throw down the challenge that a couple of goals were required to beat them. This had all been mapped out before the match, and the ruse was successful, for only eight minutes had passed when Marsh secured the necessary goal. It was a fine point, too, for Marsh had to force his passage before he could bang the ball low down past Doig into the net. Marsh netted again from a poor return by Doig, which occurrence might be said to have placed him onside; but the fact that he was in an offside position was responsible for Doig mulling the ball.

There is no doubt that Liverpool were completely put off their game in the first half by the energy of their opponents and though they endeavoured to retrieve themselves after the interval they reckoned without the Wanderers’ defenders, who were determined to preserve their untarnished record. It is singular that it was after the curtain lecture that a penalty kick was given. Parry travelling right across the field to bring down Stokes, who had throughout the game proved a very slippery customer indeed. Marsh having once met with success, was entrusted with the kick, and with another low shot, he showed his admirers how he scored goals. After that, mutual congratulations!

Let me say right off that the victory went to the right side; in fact, the Wanderers were full value for their two goals. It was a case of Second Division v. First Division styles, and the former, represented by dash and determination, carried the day. It was not kick and rush, for the long passes that were made were usually met by a colleague, who in turn gained the greatest possible ground with the least delay. There was no fishing for positions, as instanced when Marsh scored his first goal. An alleged expert would never have forced his way through.

In every department the Wanderers showed up to the best advantage – so what more can be said. The result will certainly have the effect on causing Liverpool to realise that there are other clubs seeking promotion.

It was not really a great day for goalkeeping, though in the first half Davies performed some daring deeds, and reminded one of another great ex-Rugby expert – J.W. Sutcliffe. Doig was beaten with two low shots, but in the second half particularly he got rid of some teasers, Stokes and Clifford in particular testing his capabilities.

I was told that the only weak part of the Bolton team was at full back, but I failed to discern any failings in play of either Ostick or Struthers.

The latter – a Liverpool man, by the way, makes no bones about tackling an opponent. Greenhalgh, in the centre, was the pick of the half-backs. He may not have been a success in Inter-League football, but as a breaker-up he would suit me if I was getting together a team. And what a tireless fellow he is, to be sure, giving and taking hard knocks as a matter of course. Clifford is fast developing into an expert right half-back, and Boyd completed a most capable trio.

But the work of the forwards found most favour with me, and much as I am in love with Lang and Donnelly as an English right wing, even the Sheffield United pair could not have surpassed the effectiveness of Stokes and Marsh. Stokes annoyed Fleming and Dunlop with the dainty manner in which he tripped past them, and his centres were as correct as his field work. Marsh was, of course, the hero of the day, but apart from the scoring of the two goals – a penalty goal is a chance kick always – he was certainly the best man on the field.

When he was not attacking he was defending, and really he must be as strong as a horse. The other trio of forwards played their part well. Shepherd being a successful centre-forward, though Wilson did not make the most advantage of the weakness of the opposing half-back and back, and his centring was not always true. Perhaps after reading so much of his prowess I expected too much of him.

I have said that Liverpool met their masters, but the best back on the field was Dunlop. It must be taken into account that he had to cope with an almost irresistible pair in Stokes and Marsh, but he never gave way. He retains his old fiery style of kicking. It looks rather risky, but it is not often he kicks the air instead of the ball. And apart from his sound kicking he had to meet the attentions of Marsh, and he did.

Murray did absolutely nothing in defence of his goal, and when he did get the ball he invariably kicked into touch. Parry in front of him, did not give him much help either. He did not appear to realise the importance of the game, and imagined that he was playing against Doncaster Rovers. Then again, his wandering propensities gave away a goal. Raisbeck was a success, and was, with Greenhalgh, the shining light of the middle line, with Fleming an ever willing worker, trotting after Stokes in his endeavour to put the little man off his play, even when there was no chance of tackling him. Hustling, I think, is the term to be used.

In attack it was a case of right wing an easy first as with the Wanderers. Arthur Goddard played a judicious, gentlemanly game, and I saw no reason for amusement when Struthers reminded him that it was a serious match by causing him to perform unintentional acrobatic feats. But, then, home crowds are all alike. He had a thoroughly hard-working partner in Robinson, who was to him as was Marsh to Stokes.

As with Shepherd and Wilson I had looked to a great performance from Parkinson, but he was reserving his lustre for another day, though in the second half he buckled to, and shows that he possessed skill. Raybould and Cox, experts both, compared most unfavourably with Goddard and Robinson. The energy of their opponents was too much for them.

The First Division is the correct sphere for this pair.