December 26, 1904
I have seen two Second Division matches this season. Liverpool have figured in both of them, and they have suffered defeat on each occasion, and one outcome of Saturday’s game at Clayton, the home of the Manchester United club, is that they are now two points worse than United and the Wanderers of Bolton.

It is certainly rather unfortunate for their prospects that they should lose to both their rivals, for they are the two matches which, above all others, they should have won to have maintained that supremacy over all others in the competition which was generally anticipated of them before the season started. 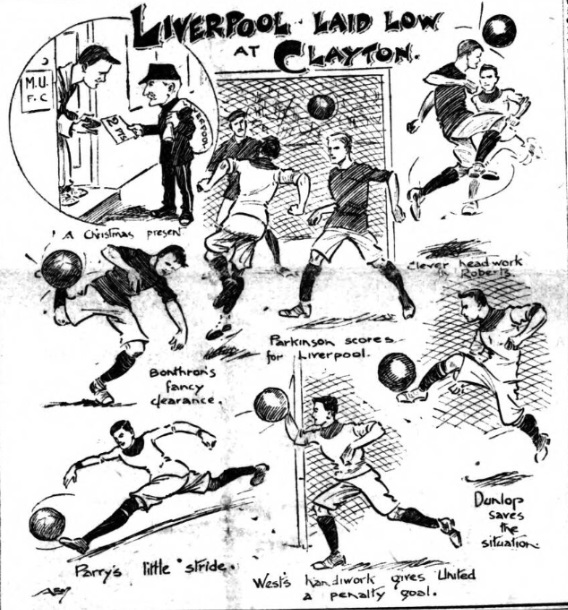 There is no doubt about it, they, by general consent, started first favourites, but the situation is becoming critical from their point of view, and so far from securing the championship I expect the officials will feel mightily pleased if either of the first two positions is attained.

It’s a pity that the United people do not see their way to give the receipts at their matches, or at least the number paying for admission. I grant that so long as the patron of the club is supplied with the information no one else need be concerned, but, after all the publication of usual “gates,” at any rate is of public interest. I thought there would be about 30,000 spectators, but I could not see under the big stand, which runs the length of the ground, and I was informed by a competent judge that I had under-estimated the attendance.

The clubs having both registered red jerseys, Liverpool appeared in all white, but they retained their sentiment towards their own colours by wearing a slip of red round the neck and writs of their jerseys.

The sun and the wind cleared the fog, and there was not the slightest interference with the game until about five minutes from the finish, when there was a sudden thickening of the atmosphere, and had the start been made at 2:30 instead of at 2:20 there is no doubt that the match would not have been completed.

From the very commencement the United took the game in hand, for in contrast to their opponents the hard ground did not appear to trouble them in the least. In the first five minutes Williams caused trouble three or four times with his accurate crosses, and again from a corner kick taken by him Peddie missed a fine opportunity of opening the scoring.

The centre-forward tried to make amends with a low, hard drive, which seemed to be making straight for the net when Doig dived down to the ball and cleared to the fraction of a second. The veteran custodian made another fine clearance from Williams, and on a further occasion he jumped up and just tipped the ball over the bar at a very critical moment.

The Liverpool men could not get going at all, but the United had to wait exactly thirty-four minutes ere they were rewarded as they deserved to be. The ball bobbed about in front of Doig in a most tantalising manner. It seemed to delight in evading the players but Williams just managed to nail it and put it into the net. No goalkeeper could be blamed for not preventing such a goal with so many men in his near vicinity.

Ten minutes later Liverpool were awarded a free kick, and the crowd had barely time to realise that the kick was taken when Parkinson headed into the net. It was not a particularly smart goal, though I liked the “quick as lightning” method of taking the free kick.

After an interval of eight minutes – really shocking this, Mr. Lewis! – the United went at it hammer and tings, and two minutes after the restart Dunlop kicked the ball from right under the cross-bar, with Doig out of his goal, but three minutes later Roberts crashed the ball into the net. United were thus ahead again, and had it not been for Doig and Dunlop Liverpool’s charge must have fallen on more occasions.

With ten minutes to go, however, the score was made 3-1, at which it stood to the finish. It came about in this way: Schofield got going in fine style, and beating Dunlop, centred. The ball evaded Doig, and whether it would have gone into the net or grazed the upright is a matter of opinion. West evidently thought that there was going to be a goal, so he took the risk by fisting the ball away, for there is always a possibility of a penalty kick not counting. But that taken by Arkesden did. It was done so skilfully, too. He had no intention of kick a Rugby goal; he looked at the ball, at Doig, at the net, and the pushed the between the space of Doig’s figure and the upright. That was how he got the penalty goal. So easy!

There was no question as to which was the better side, and Liverpudlians gave the United all credit for their fine victory; indeed they could not do otherwise to be sportsmen. They did just as Bolton did – they overwhelmed their opponents from the commencement, which seems to be the most effective way of dealing with an assumed superior combination. It was just the same after the interval, when their aggressiveness bore tangible result in a few minutes, whereas they had to wait a long time for the deserved success in the first half.

There was only really one period when Liverpool appeared at all likely to spring a surprise. It was after the United scored the third goal, and the easing up might easily have cost a point, particularly in the uncertain light. However, there was not mistake made, though a Liverpool forward erred in running the ball over the touch-line instead of through the goal.

I cannot understand Liverpool. To be candid, I was one of the number who thought that they would walk back into the First Division, but their task is a difficult one on the form of the two matches I have seen them play. At Bolton they were on soft ground, at Manchester a hard one; but on both occasions they were out-classed, comparatively speaking.

Of course, it must be admitted that I have seen the, on the pitches of their two rivals, when odds were against them, but I maintain that these are the very two games they should have won. To be candid, they are not a Second Division team. Their proper sphere is the First Division; but unfortunately they have not adapted themselves to the circumstances of their changed company. They require to adopt the policy of “When in Rome do as Rome does.”

Of course, it must be inferred that I do not think that they will return to their former state, but rather that they are not, after all, any better than either Manchester United or Bolton Wanderers, as I have supposed them to be. That is how I have summed them up after witnessing their two most trying engagements.

the United were good all round. There was a capital understanding between the men. The forwards were always well up, none lagging behind, for the half-backs did all the feeding that was necessary, while the backs seldom made a mistake.

The left wingers were perhaps the more dangerous pair. Williams was introduced at the last moment, and there was not a smarter forward on the ground. If Hartwell is a superior man – I have not seen him play myself – then the United are lucky in being able to choose between such a pair. Of course, his partner gave him every assistance; so too, did Peddie, who I was pleased to see in fair form.

Neither did the right wing fail in their duty, though Schofield was not particularly anxious to engage in charging bouts with Dunlop. But what pleased me most was not their individual merit, but the United method of attack, which brought in its own reward.

The star in the half-back line was Charles Roberts. I might say that he was the best half-back on the field. Indeed, I might be tempted to say that he was the most prominent figure in the game. The ex-Grimsby Town man will surely make a name for himself. He does not appear to be particularly nippy on his feet, but he is a clever tackler and an admirable placer. Possibly he was afraid to attempt even time on the hard ground, and that he is quicker than he appeared to be.

Downie was very clever against Cox and Raybould, and Bell, a well-built young man, struck me rather favourably as a left half. Bonthron shared the honours with Roberts. He was seldom beaten, and moreover he did not appear to be particularly rough, indeed, except for falls the trainers were not troubled much. Hayes made a capable partner, and Moger performed his duties in a very creditable manner.

The heroes on the losing side were Doig and Dunlop. I think it is 17 years since Doig played in his first international match, but no keeper in the country could have improved on his display on Saturday. He got high shots, low shots, and shots from every angle and it was really a pity that he was beaten thrice. Of course, with a penalty kick everything is against the keeper.

Then Dunlop proved a rare helpmeet, his tackling and kicking being as usual, full of spirit, while often he was acting as assistant goalkeeper. Bonthron and Dunlop might make a nice couple for the Anglo-Scots. Raisbeck, too, like Doig and Dunlop, fully maintained the reputation of Scotland for producing experts, and veteran Fleming also did his duty, so that the four Scotsmen in the team were the best of the eleven.

Parry, on the other hand, did not show Welsh international form. He wanders about too much to split my idea of a wing half-back. He should leave that part of the game to Raisbeck. My Bolton impression that Cox and Raybould are more suited for the First Division than the Second was confirmed, in fact neither outside men were successful.

Goddard scarcely touched the ball during the first half hour of the game and was practically a “passenger,” but he informed me that he had been suffering from indigestion. Parkinson and Robinson were, in my opinion, the pick of the forwards.

By the way, West made his first appearance for the season at right back, and was not disgraced. Certainly he was a vast improvement on David Murray, his predecessor. 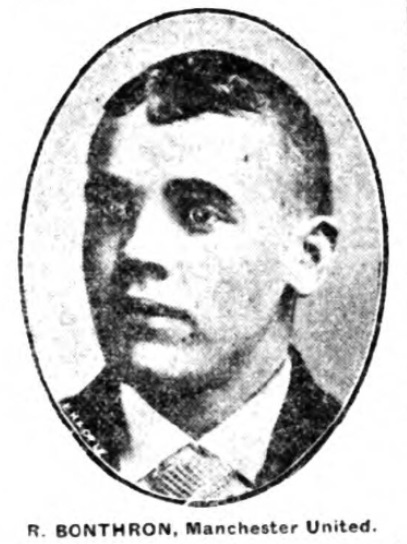