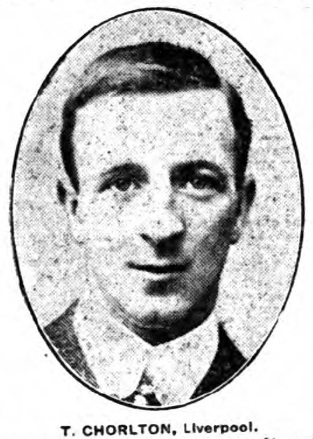 January 23, 1905
Liverpool had perforce to make several changes in their forward line against Lincoln City at Anfield, and for he second time this season dropped a point on their own ground. Close upon 12,000 persons witnessed the game, the majority of whom were sadly disappointed with the exhibition of football to which they were treated, for the Anfielders have not shaped more wretchedly on their own ground since they entered the Second League.

In the first half Liverpool had by far the more chances of scoring, but they could only once get the ball past Buist. The point came after a creditable piece of work by Garside, who smartly kept the ball from going out of play, and centred from the line to Robinson, who could not avoid scoring.

Lincoln were occasionally able to get near Doig, and from a bully Hood sent in a terrific shot which the Liverpool keeper did well to tip over the bar. Goddard had hard line with a low shot which struck the upright, and the interval arrived with the Anfielders leading by a goal.

Afterwards there was witnessed a frequent succession of blunders by the Liverpool forwards, who missed the easiest of chances time after time, and one centre from Goddard went across the goalmouth, with Cox and Robinson waiting for each other to tip the ball into the net. Close on time Lincoln made a great effort, and from a centre Simpson headed an equalising goal.

A poor display.
Liverpool did not deserve to win, and with the exception of the full backs the teamshaped wretchedly. The forward play was devoid of combination: there was an utter lack of cleverness, and, near goal, the attempts at scoring were simply ludicrous.

Garside put across some capital centres, but was very slow in getting away, and this often led to his being dispossessed. Of the remainder it were charitable to draw a veil over their efforts, and confidence in their ability to reach their rivals in the League has been sadly discounted thereby.

Parry gave a feeble exhibition, whilst Raisbeck was none too effective, and Fleming tried hard without being unduly prominent. West and Chorlton kicked splendidly, and the latter seems likely to develop into a more than useful defender. Doig made some capital clearances, and had the attack been equal to the defence Lincoln would never have shared the honours.

Buist kept a good goal, and in the first half made some useful saves, but after the change of ends he had nothing to do. At full back, W. Simpson performed excellently, his tackling and kicking being exceptionally clever. Hood was the best of the half-backs, though Fraser did well; and in the front line Watson on the extreme right put in some very effective work.