August 11, 1906
Having dealt at length with Everton’s prospects it is now one’s duty and privilege (writes “Richard Samuel”) to turn to an equally pleasing theme – “The Liverpool Football Club, season 1906-7. Looking ahead.”

Truly the writer is in an enviable position in that he constitutes one of the “speaking instruments” for a city which houses both the English Cup holders, and the First Division League champions!

As all my readers know, Liverpool accomplished something last season previously unknown in following up a Second Division championship with a Senior Division triumph. And never could success come more appropriately, for the 1905-6 season was entered upon under a fresh and more popular basis; its loyal supporters were given a voice in the management, and naturally enough the men placed at the helm under the chairmanship of Mr. Edwin Berry, C.C., and the vice-chairmanship of Mr. John McKenna, were a trifle anxious in the opening stages. And the first month proved indeed, a time of worry, match after match being lost. But what a glorious ending!

The writer cannot recall a League championship being annexed under such, or similar, circumstances. Beyond all doubt the acquisition of players like Hardy and Bradley, the development as a centre forward of Hewitt, and above all the pulling together of the team as a whole, backed up by perfect harmony on the managerial bench, plus the able secretaryship of Mr. Tom Watson, worked wonders. The camaraderie, the esprit de corps, was there. But having done so much in a playing sense, the Liverpool directors have, during the past three months, turned their attention in another direction. They have sought to do something worthy the name on behalf of the club’s most genuine friends – the general public. We are verging on the era of a new and greater Anfield. The enclosure which served Everton’s purpose for years and later, with added structural comforts, served Liverpool equally well has for some seasons past been found inadequate in the whole, so splendidly were the Reds supported. Hence on Derby Days the Livers lost many a bright sovereign simply because they could not house the people.

For some reason – possibly he was unduly pessimistic – Dr.Houlding apparently did not see his way clear to straightway pull down and rebuilt in the manner that so many of his contemporaries were doing, but it was common property that following the club’s re-construction, the new directorate would embark upon a scheme of enlargement and added equipment at the first possible opportunity. And so generously was the club supported last season that the time for action speedily ripened. Directly when the curtain fell in April the builders took possession of the enclosure and from that time onwards Anfield’s interior has been one great scene of animation. Mountains (in the shape of old stands) have been removed and mountains (in the shape of huge banking up on two sides of the ground) have heaved in sight. When completed it is anticipated that New Anfield will accommodate 45,000 to 48,000 spectators far and away more comfortably than did Old Anfield a matter of 25,000. It will not be a mere question of admission to the ground irrespective of whether a man can see or otherwise, but it is asserted that without the least straining of the neck or toe, all will be able to witness the play with ease.

The writer strolled as far as Anfield on Monday morning, and found there many interesting spectators, who seemed delighted with the progress made towards the completion of their creature comfort. I was joined some time later by Mr. J. McKenna, the President of the Lancashire Combination, who very kindly piloted me over and around the revised area. He seemed very satisfied with the progress made. Before it began, Mr. McKenna and his co-directors were most anxious lest too much had been attempted ere another active season should dawn upon them, but their fears on that score, he added, were soon allayed. Their choice of an architect, or – as they are called in Scotland – an engineer, had been a very happy one. Than Mr. Archibald Leitch, of Glasgow, there are few better men of his craft, whilst Mr. Nelson, I am told, is a splendid coadjutor, and their works speak eloquently in support thereof. Mr. Leech has had experience regarding the plans of such a model ground as Chelsea’s.
He has also been identified with the work carried on at Fulham F.C., and likewise that of Newcastle United’s splendid new enclosure – Greater St. James’. And Liverpool have reaped the benefit of such experience, for slight revisions, compared with the enclosures named are to be seen at Anfield. One great feature will be the uniform feature of the ground when completed. Method is writ large over the whole thing. Around all four sides of the playing pitch will be seen tier after tier of terracing rising up like a huge amphi-theatre, ere one comes to the stands proper. The banking up has necessitated hundreds of thousands of tons of ashes being deposited around the arena. Then the banking up does not merely consist of a giant slope, but rises tier after tier – constituting a mammoth four sided stand on terra firma. Neat and withal powerful iron stanchions will make it a matter of great difficulty to indulge in any barrier barrier-breaking. Then by an ingenious trench-like arrangement – the digging out of a quantity of earth just beyond the touch line – this huge gallery begins several feet nearer the playing portion than would otherwise be possible, and thus one finds some four or five rows extending right round which would otherwise have been non-existent, giving added accommodation for 4,000 more people, and the best of it is, as Mr. McKenna remarked, these particular 4,000 have the finest view perhaps of the play. They are certainly nearest the players. The playing portion which last season had a five feet fall from the Anfield-road end has been brought to within two feet of being dead-level. The new turf seems to have knit capitally and the one great need now remaining, said my guide, was a copious rainfall throughout the month. This, however, seems too much to ask for from August. The original large stand has been transferred from the north western side of the enclosure to the Kemlyn-street side, but wouldn’t be identified as such save for the familiar and well used seats. Viewed from the opposite side this stand look “grand” indeed with its fine new steel roof put on at a cost of some £800. It is much more lofty than previously, for, being raised at the rear of the new splendid terracing, it has been found necessary to erect it upon high brickwork foundation walls. The Anfield-road stand has been lengthened somewhat and raised at one end, and this seems an especially fine vantage ground for the man in the crowd.

It will be found impossible to complete the Walton Breck stand this summer, nor yet that to be erected where the large stand formerly stood. This latter, I hear, unofficially, is to be a “double decker.” These stands will come all in good time, and the general public will assuredly content themselves yet a little while in patience, knowing all connected with the club are doing their best. The ingress and egress of the people have been well studied. No fewer than 47 turnstiles will click next season compared with 26 as previously! Then at all four angles mammoth exit gates have been erected, but especially at the Walton Breck side, for, as Mr. McKenna remarked, nearly all the people make for the cars, and above all like to get out quickly. A feature is the splendid lavatory convenience set up at each goal end of the ground. That on the Walton Breck side extends almost the full breadth of the enclosure, and by ingenious swing-door arrangements part of these are open to the general public on non match days. This season the players will use the same dressing-rooms as formerly, but will have an exclusive entrance  to, the arena, and thus escape their admirers’ periodical too warm embraces. Eventually they will be located at the opposite angle, and it is here, too, that finally the club offices, etc., will be erected.

Temporary rooms for referee’s and players’ use are to be found under one end of tehe stand. The Press, I should state, will be temporarily housed opposite the grand stand during 1906-7. It is intended that eventually all four stands will join hands or touch. Anfield will then indeed look a picture, and may lay claim to being one of the best appointed grounds in the country. Mr. McKenna is confident the enclosure will be found “nicely ready” for the Stoke match on September 1, and especially so for its first test  match – when Everton are due – Sept. 29th.
(Cricket and Football Field: August 11, 1906) 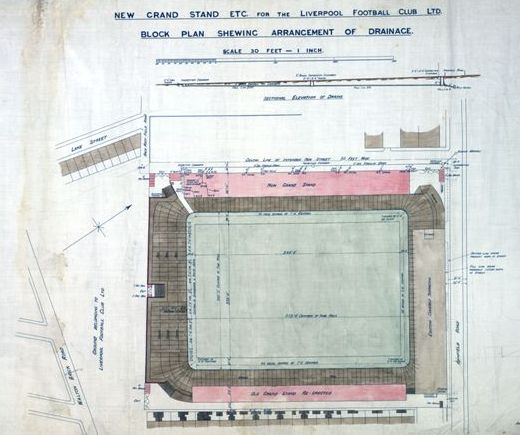