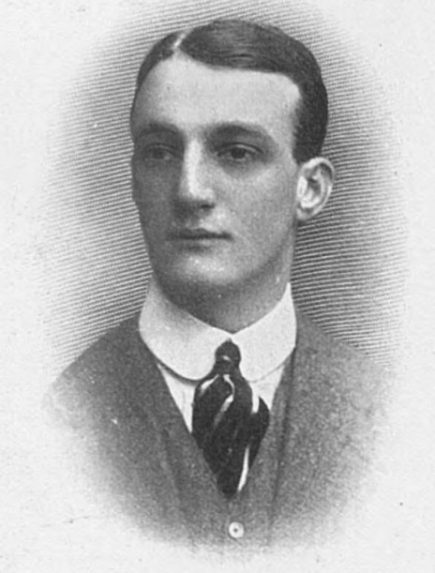 February 15, 1908
The portrait we present this week is that of Mr. Arthur Berry, son of Mr. Edwin Berry, Chairman of the Liverpool Football Club, and our reason for so doing is that he has been selected to take part in the great match between Oxford and Cambridge Universities, which will be played to-day at Queen’s Club, London.

Although this game may to some extent be overshadowed nowadays by Internationals, Cup Ties, and big League fights, yet it still has a fascination for those who love the game when played for sport’s sake – and there is no doubt about that being the case in this instance. And every man who plays “Soccer” and goes up to either University hope that he carries “blue” in his bag.

But this game will have a special interest to footballers in Liverpool, whether their colours are blue or red, for they will all remember that not only has Mr. Edwin Berry done much for the game by his connection with Liverpool,  but also that in the days of yesteryear he was a pioneer of football in this city, and made his mark with Everton in stirring games that were fought for the Liverpool Cup. So the son is following in the footsteps of a worthy father, and with greater opportunities has realised a high ambition.

Arthur Berry was born in Liverpool, just twenty years ago, and he was educated at Denstone, a College famous as a sports centre. While there he was a brilliant exponent of nearly every branch of athletics, and I will give a brief resume of his doings. In cricket he finished up as Captain of the XI, and from a School magazine I cull the following: –

“Arthur Berry incited the rest of team to greater keenness by his splendid fielding; as a batsman he seemed able to his anything and rarely failed to make runs. As a bowler he met with great success, being fast with a deadly swerve. A magnificent field, and won the bat offered for this department.”

As he had a batting average of 39,25, and a bowling average of just over 9 his usefulness is apparent to all. He is also a fine tennis player, and he was one of the school champions, while he was a fine sprinter, and won many prizes. Rugger was the football game of the school, and he regularly represented the team as three quarter, but his light weighing made him a mark for heavier men, and he was several times on the injured list.

On leaving school he proceeded to Oxford University, being entered at Wadham, Charles Burgess Fry’s College. There he turned his attention to the “Soccer” code, and speedily won a place in his college team. His play attracted the attention of G.N. Foster, Captain of the ‘Varsity, with the result above stated. Originally he started as outside right, and last season he played several games with Liverpool Reserves in that position.

This season he has assisted Wrexham – who play in the Birmingham League – whenever possible, and being tried as inside right he has retained that berth. He is speedy and a sure shot. He was selected to play for the Amateurs of the South last Monday at Chelsea, but in consequence of the game to-day he decided not to turn out.

For the coming season he will Captain the Wadham Tennis Team, and at the Athletic Sports of that College he won the 100 yards, the 120 yards hurdles, the long jump, the high jump, and was second in the quarter mile. From this it will be seen that he is a versatile athlete. He is far from being a giant in physique, being 5ft. 8 ½in. in height, and weighing about 10st 6lb.

I understand that when he has finished his college career he will join the legal profession, and he has emulated his father in sport so I hope he will in the law. For once an a way everybody will shout for the Dark Blues to-day; and will look with eagerness for the result of this year’s ‘Varsity match, hoping that Oxford have gained the day and equaled the winning record of their rivals.
(Joint Everton and Liverpool Programme: February 15, 1908)