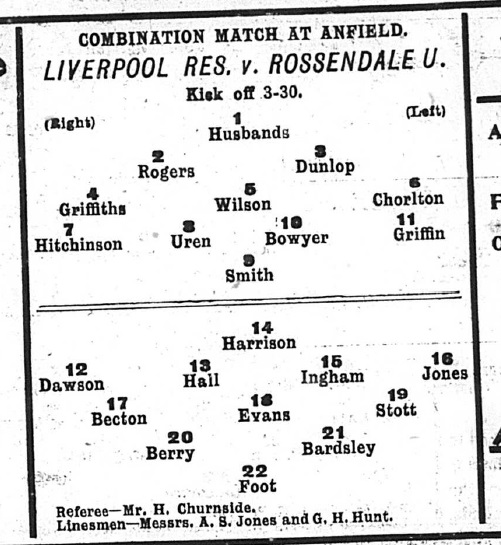 At one period of their Lancashire Combination match with Rossendale United at Anfield it seemed as if the Reds would sustain a severe defeat, for they were two goals behind shortly after the second half had commenced. Harrison netted twice for the visitors, and then the Anfielders began to make headway. Griffiths scored, and a little later Bowyer equalised, the final result being a draw of two goals.

During the first half, Rossendale played a vigorous game, and were frequently dangerous, but Husbands came to the rescue with many fine clearances. The United deserved their half time lead, and their defence was reliable. On the other hand, the home forwards moved erratically, and near goal were often at fault, missing easy chances of gaining the lead.

Rogers gave a capital display at full back, and Chorlton was the pick of the intermediate trio. The newcomer, Smith created a favourable impression at centre forward, and considering it was his first appearance, he shaped in promising style with the chances he obtained. Uren did not shine very refulgently, but Griffin and Bowyer were rare workers.
(Joint Everton and Liverpool Match Programme: April 11, 1908)