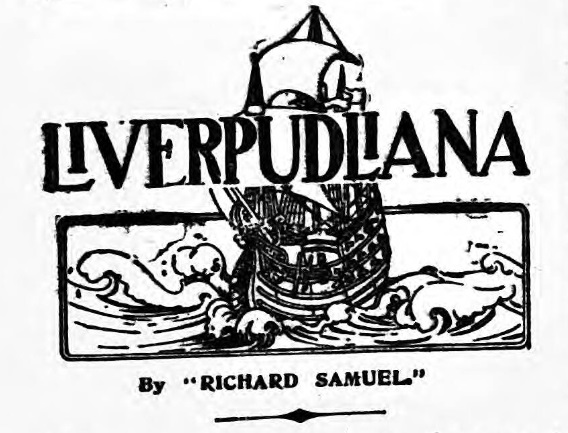 September 19, 1908
Liverpool’s undeserved defeat
Liverpool may have been a trifle unfortunate in winning their two opening games, if those games were weighed up in the matter of pressure on the goalkeepers concerned, but we must admit that the Livers’ two appearance on foreign soil within the past week have shown our Anfield Reds up in a splendidly favourable light. Sheffield United have been beaten by two clear goals at Bramall Lane, whilst a narrow defeat was sustained at Blackburn after a game in which Liverpool were far and away the more aggressive side.

If ever a club felt pleased with itself for securing a goalkeeping recruit it is this same Blackburn Rovers. It was A-S-H-C-R-O-F-T right cross the face of the Blackburn goal, and it is certainly strange that a Liverpool-born custodian should go to bring about the Liverpool Club’s first 1908-9 defeat. Sam Hardy wasn’t tested nearly so much, yet he had no chance of saving Bill Davies’s scoring shot.

Tom Rogers, who played so well at Ewood last season, again distinguished himself, and Percy Saul, upon his return to duty, did fairly well. The match proved additionally interesting in that therein Captain Alex Raisbeck made his first appearance of the season. All things considered he did well, but the best visiting middleman was that genial youngster, Tom Chorlton.

Forward, Joe Hewitt evinced further improvement when opposed to young George Chapman, who as a lad witnessed many games at Anfield. The great man was Ronald Orr, however. He proved a splendid partner for John Cox, and the pair sorely bothered the great Bob Crompton before the end arrived. Orr, like Edgar Chadwick in bygone days, is showing that high speed is not indispensable to success in an inside man. Cleverness can generally be relied upon to overcome speed. Arthur Goddard also played good football, but his partner Robert Robinson, inclined rather much to roaming o’er Ewood’s green.

As at Blackburn, Liverpool proved distinctly the superior side, but instead of being denied a goal they established a two goals lead in the first half and won with great ease. Orr, who played another splendidly effective game, repeated his Chelsea match exploit by scoring the two goals for his side. Apart from this, his judicious passes and head work to both Cox and Hewitt were most noticeable. Orr may be somewhat of service man, but the fact remains that he comprises a good deal of he brains of the Liverpool attack just now. Long may he reign. Just such another heady man at inside right would further improve the Anfield team, who, however, were far and away superior to Ernest Needham’s lot on this occasion.

I hear good accounts of Walter Smith, a little local at centre forward in the reserve team. One wonders how he would succeed at inside right? He appealed to the writer in the practice matches as being of the “born footballer” type: one possessing a touch of Birmingham’s Jones. His drawback are smallness and a tendency towards selfishness.

Jack Parkinson’s judgment was frequently at fault against United re the offside rule – Parkie is always anxious to win. The other members of the team were highly satisfactory, Parry making a capital first appearance. Indeed, how can one grumble where a team puts up two such fine fights as Liverpool’s latest at Blackburn and Sheffield? A nice run in the matter of consistency is just what the Reds’ supporters need, however, to keep the pulse stirring.
(Cricket and Football Field: September 19, 1908)