A drawn game was the outcome of the meeting of the Anfield second string and the Rovers Reserves. Speakman scored for the Reds, and Orr equalised after the change of ends.

Malone shaped like proving a worthy successor to Beeby, and the defence of West and Longworth left nothing to be desired.

Peake was tried at right half back, but Hignett was feeble in the centre, hence the Welshman was not afforded a fair chance of showing his abilities in a new position. When he resumed in his usual place, the effect was more marked, improvement ensuing immediately.

Uren and Bowyer were prominent in the forward line. Stuart started with his new club unsatisfactory, and was injured.
(Joint Everton and Liverpool Match Programme, 17-09-1910) 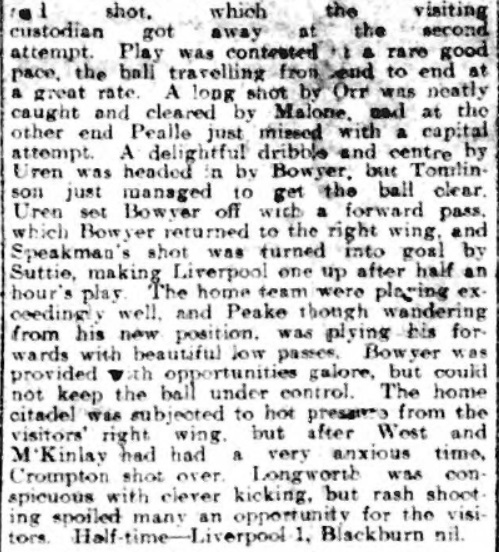 From the Joint Everton and Liverpool Match Programme, Saturday, September 10 – 1910.