May 15, 1911
The past week brought both joy and trouble to the Manchester City club. On Wednesday they were fined £10 by the Management Committee of the Lancashire Combination for a technical breach of the rules in signing on Albert Keary, an inside left-winger of Liverpool Dominion, who was also a signed amateur player for Accrington Stanley. The City made a point of the fact that Keary signed for them as a professional. They contend that in this case he is a free agent, and they have intimated their intention of taking the matter to a higher tribunal.

Whilst this matter is abeyance they have considerably strengthened their reserve forces by securing the signature of Gus Beeby, Liverpool’s reserve goalkeeper, who has gone to Hyde Road to fill the vacancy created by the departure of Jack Lyall to Dundee. This transaction was consummated on Thursday, and with Walter Smith and Beeby to guard their citadel the City need have to qualms as to this part of their team next season. 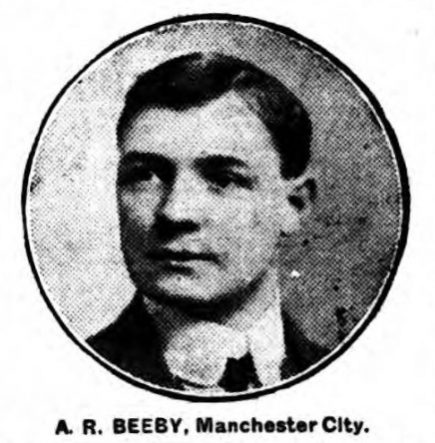 Beeby hails from the county of goalkeepers. He was born at Osmaston, in Derbyshire, and was educated at the Osmaston Grammar School, where he commenced his career as a footballer as a half-back or forward.

After leaving school Beeby joined the Osmaston village club, which was connected with the Ashbourne and District League, and, as a general rule, figured in the full-back division. However, in his second season with them the usual goalkeeper could not turn out in a local cup-tie with Ashbourne Town, and Beeby was requested to fill the vacancy. So impressed were his opponents by his display that they prevailed upon him to join their ranks as their custodian.

Thus at the age of nineteen he became recognised as a goalkeeper, and quickly demonstrated that this was his natural position in a team. In an English Cup-tie against Burton United he shaped so ably that the latter desired his signature, but he had in the meantime been recommended to Liverpool, who promptly secured him.

In December, 1908, he went to Anfield, and his abilities soon attracted notice, the result being that he was regularly chosen for the reserve team, and most efficiently discharged his duties when called up for service with the League eleven. Not only in personal appearance, but in style of clearing his goal, he showed a marked likeness to Sam Hardy, and spectators at Anfield were often deceived for a time when he turned out unexpectedly with the League team.

Beeby is also a smart cricketer, and as a wicket-keeper has gained a well-merited reputation for more than average ability. Standing 5ft. 10in., and weighing 12st. 10lb., he is well adapted for the post of goalkeeper, from a physical point of view. He displays a nimbleness when dealing with shots that Hardy alone can excel, and with high drives he is especially effective. Though not perhaps so nimble in pouncing upon ground balls as is the incomparable “Sam,” he possesses a quick eye and anticipates danger intelligently.
(Source: Athletic News: May 15, 1911)