April 29, 1913
It isn’t very often that I do anything in the writing line; in fact, to tell the truth, I am scarcely cut out for journalism. Football is my profession, but when the particulars of my career are wanted who is there to supply the details so well as I?

Nobody but myself can quite understand what my football life has meant to me, because, if nothing else, I am extremely enthusiastic, and quite often what would appear to the onlooker to be but a very insignificant occurrence in a match gives me a great amount of pleasure.

Exciting times.
From the earliest days of my youth – and I am now twenty-eight years of age, having been born in August, 1884 – I have been far more keen to play than to look on at others, and it is quite possible that my eagerness to be “in the picture” has had a lot to do with the few successes that have attended my efforts.

Quite a large number of people imagine that a goalkeeper doesn’t get much in the way of excitement, but in this opinion they are very wide of the mark.

I have had some very stirring times indeed, and, as for something to make your hair curl, you want to be in goal when a Cup-tie is on and two or three forwards are bearing down upon you, with the backs already beaten. Whew!

In the forward lines.
But I wasn’t always a goalkeeper. Oh, no! For in my very young days – as a schoolboy in my native village of Newbold, near Chesterfield – I was considered, by the other boys at least, to be something of a flier at centre forward.

Well, I remember those school games and the excitement we got out of them, but was I look back now I cannot help wondering why five players out of every six, who make their mark in the world of football, first come out as centre forwards when very young.

I suppose it is owing to the fact that when a youngster shows himself to be a natural footballer he is put in the best position for scoring goals, and it is only when he gets into senior club games that he shows which position he is really fitted for.

My first team.
I suppose, like most other youths, that I imagined myself something of a great player when I was first asked to play for a side after leaving school.

Anyhow, I know I was very pleased with myself when I started to play for our village team called Newbold White Star.

You might expect me to smile when thinking of my first club, but as a matter of fact, even though I now play for a First League club, by recollections of the White Star are mingled with pride.

We had a nicely balanced side, and, in my first season, we won two cups viz., the Bayley Cup and the Derbyshire Minor Cup.

My first League game.
My first League match, after becoming a professional, was for Chesterfield, and our opponents were Woolwich Arsenal. I cannot remember the exact date, but I know the game was played on a Good Friday at Woolwich, and a more nervous time than that just before we started I never experienced.

I was practically a lad, and it was a big thing to keep goal against such a side as Woolwich had at that time. However, as the game went on, so I got back all my old confidence and did fairly well.

Anyhow, I must have satisfied our directors for, although we lost that match by 3 to 0, I remained in the team up to the time that I joined Liverpool.

With Liverpool.
It was on June 16th, 1905, that I signed on for Liverpool, and even then my prospects did not appear to be too bright, for Doig, the Scottish International, was first goalkeeper for my new club.

However, I soon got a chance in a First League game, and did sufficiently well to remain with the team until June, 1912, when I was transferred to my present club, Aston Villa.

To the best of my recollection my first match in the League team was in October, 1905, when we opposed Manchester City at Manchester. It was a very keen fight, the defence on both sides being exceedingly good, and I think we won by 1 to 0.

League champions.
At the end of that season – April 30th, 1906 – we were Champions of the First League, and it was at one time considered probable that we would have won double honours, viz., the League Championship and the Association Cup, but the latter was not destined to come to our side.

Still, I have always thought we stood a very good chance, and the game which put paid to our ambition was the semi-final, in which we had to meet our neighbours, Everton, who eventually won the Cup.

Struggle of the rivals.
That was the greatest Cup-tie in which I have ever played, and if I live to be a hundred the memories of every kick in the game will remain with me.

It was at the same time, the greatest and the most disappointing. Yet, what a game! Think of it; Liverpool versus Everton, neighbouring clubs, and both eager to annex the trophy.

Small wonder that 15,000 people travelled from Liverpool to Villa Park, Birmingham, to witness the fight, but, quite apart from local interest the ordinary football loving public were alive to the fact that the game would be worth seeing, and, altogether, there were 37,000 on the ground.

The cause of defeat.
Those people saw something for their money, and the battled ruled fast and furious for sixty-five minutes before a goal was scored.

Then, Abbott, the Everton half, had a shot, which West, one of our backs, seeing that it was going behind, allowed to go. Dunlop, our other back, however, as if fascinated by the ball, had a kick, in the excitement of the moment, diverted it into the net before I had a chance to get anywhere near. But for this the ball would have gone behind, and we were all left so astonished that before we quite realised it Everton swept down and scored again.

Three ”caps.”
In the following season – February 16th, 1907 – I played my first International match for England, and this honour was quickly followed by two more, so that I gained all three “caps” that year, against Ireland, Wales, and Scotland.

Altogether I have represented England on fourteen occasions; four times against Scotland, three against Wales, four against Ireland, twice against Hungary, and once against Austria.

The first, which of course was to me the most important, seeing that to play for England was the height of my ambition, was against Ireland at Goodison Park, and a more disappointing game I never took part in.

A quiet time.
It is true that England won by 1 to 0, but the difference should have been far greater. We had a good defence, the three halves, Warren, Wedlock, and R.M. Hawkes, being especially effective, but our forwards were very disappointing, and they were further handicapped by an injury to Hilsdon’s foot.

There was no score at half-time, and after that four fouls were given against Ireland in the space of about four minutes. H.P. Hardman, of Everton, scored the only goal in the match, and at the end he collared the ball as a memento.

It was the quietest time I ever had in goal.

The “levelling-up” process.
There are many people who insist that the game has gone down, and that, as an example certain teams in the old days went through seasons in the League without losing a match.

Now, I don’t say my opinion is worth a lot, but in my career I have played in every class of football, schoolboy, junior, senior, Second League, First League, North v. South, English League versus both Scottish and Irish, and International, so I feel fully qualified to judge, and it is my contention that the game today is as good as ever it was.

The only difference is, that the strength of the teams has become levelled up, and that, instead of having two or three big outstanding sides, the clubs are now on terms of equality, each having to fight hard for points, no matter whether playing at home or away.
(Source: Sunderland Daily Echo: April 29, 1913) 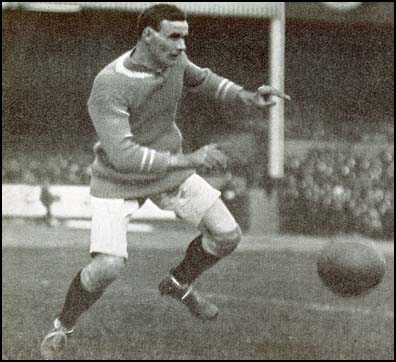