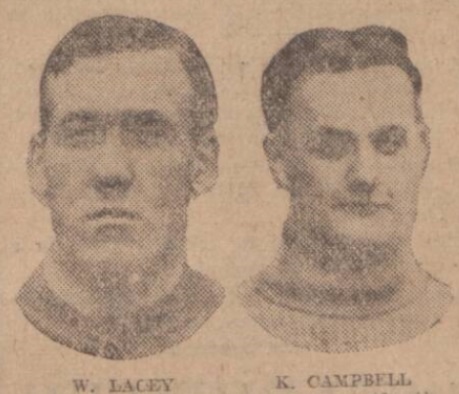 Liverpool beat Barnsley by a goal to nil yesterday at Barnsley. It is stale news, you say? Yes, and very nice too. It was a great game – keen, clean with one exception, when Travers kicked Pursell and fighting pose was adopted by both players. Referee Bamlett refereed the game thoroughly from start to finish, and though he was unable to see the offence referred to, he was very emphatic in informing the players that he would stand no nonsense, and that any further offence would mean that the player would be ordered from the field. His control of the game was capital, and it was his determined stoppage of the first rough incident that ensured the Bury and Hull tactics being impossible.

The game was like the referee – hard. Play was fast, it was clever, dogged, and the pace did not slacken. Some folk after half-time (it was for twenty minutes after the interval that Barnsley made their greatest raids) said Liverpool could not win if extra time was needed as they would not stay as well as the Barnsley men. That was a libel on Trainer Billy Connell, who had got his men fit, and I said at the time that Liverpool would stay if necessary, but that the game could yet be clinched in the last twenty minutes.

As a matter of fact Barnsley actually tired towards the close, and Liverpool, making extra effort – if such were possible – finished stringer and rattled at Cooper as they had not done at any point previously. This was a strange awakening. The beauty of the match from one point of view was: Liverpool’s defence being rock-like and seemingly unbeatable, the question arose whether Liverpool would ever make Cooper handle the ball.

True, in the first half he had run out to pick up the ball, and he had shots fired his way, the ball hitting a defender. Still, one would have thought that the Everton lesson of Saturday last had not been lost to Liverpool. Moreover, Barnsley gave Liverpool a perfect example yesterday: they shot often, instanter, and put plenty of power behind their shots, too.

The score.
Cooper was unemployed almost throughout the game, and it was only when near the finish that he looked like being beaten from a yard range. Parkinson received the ball from Mackinlay, who beeded not the appeal for offside, and Parkinson had a perfect gift goal. He screwed the ball outside by some process. That was five minutes from the time, and when Travers dashed forward and shot he  was quite near turning Parkinson’s awful miss into a tragedy.

Lowe was damaged in trying to make a sure goal, and then Lacey drove to goal, the ball dragging along and not being of pace or direction to worry Cooper. Then came the wound for Barnsley. Play had been on the left wing, and Parkinson was put in possession. His pass was along the ground towards the right wing. There was just a chance of Lacey being unable to reach it, for he had been lying near the centre forward. He strode out in his own peculiar manner, and one felt he had not only confidence in his own ability to get the ball but to score, so “aisy” was his action. He put the ball to Cooper’s right hand side, as the goalkeeper had me the left side his hope.

A goal! What tremendous enthusiasm. Lacey had scored at Anfield on Saturday, and yesterday he had won the game so far as the forwards were concerned. He worked like a tiger, and was the only forward who looked like scoring a goal. At times a forward scores, and the credit of actually netting the ball should be infinitesimal. Lacey’s was not that type of case. If ever a forward deserved to score for general play and earnest endeavour, that player was Lacey. So no wonder the crowd of Liverpudlians (800 strong) transposed the song of “1906” and made it: “Aye, Aye, Lacey Scored the Goals.”

Forwards weak.
The Liverpool forwards were frankly disappointing. Admitting that they were up against do-or-die backs (Bethune is a specially strong back who cuts in rather dangerously at times, and doubtless his tactics made Sheldon a trifle anxious for his limbs, good plucked one though the Manchester man be) and tough half backs, the extreme wing work was weak. Sheldon showed up well near the finish, but he did not act in the cloggy going. Mackinlay was good in parts, and his centres too often hit a defender, while he and Parkinson had offside called against them pretty frequently. Parkinson was unable to do more than pass the ball out to the wings. He was well held by Bratley and Downs; in fact, the latter was so impressed by his easy task that he began to take abnormal risks, and his dribbling and dallying in front of his own goal led to his side’s downfall. There were three occasions when Downs courted and found defeat, and one goal came therefrom (indirectly, of course), so that the famed back blotched his copybook.

How could Liverpool expect to win if they did not shoot? While the critics says that Cooper had but three shots to handle – one from Fairfoull after the goal had been scored showed up Cooper in a favourable light – they do not do not do the Liverpool forwards justice, in that they do not point to the fairly numerous occasions when shots were luckily charged down. Still, if those critics get the Liverpool forwards thinking about the very essence of forwards’ play I shall be thankful. If the forwards do not shoot with more accuracy and frequency then then Cup passage will be a back passage to Liverpool ere long. Even Gillingham could win if our forwards do not improve in shooting.

There is a shyness about shooting, and an increasing determination to pit-pat the ball till it is in a perfect position for a shot. The ball is too frequently made “dead” before a shot. Forwards must take risks with first-time shots, and Barnsley, for this very reason, made Liverpool’s defence work hard throughout.

Earned their pay.
Campbell was brilliant. The more work they gave him the more certain did he place himself for the shots that were rained upon him. His pick-up was clean, his kick was long, until he positively tired through pressure of work in that direction; and the way he placed himself for shots was simply splendid. “The shots went straight at him,” said some growlers. Did they? He placed himself for the shot. Further, the shots were always of the “beery” kind that are hard to take. A slight miss in clutching the ball and a goal is a surety. The ball generally went head high, and Campbell took it like a first-class wicket-keeper. It was a grand exhibition of goalkeeping, and I think the Cambuslang goalkeeper is one of the greatest in the world. Before him were two resolute backs of infinite strength, grim determination, and a knowledge of how and when to cut in.

Pursell had most work to do as the start, but in the end each man was tried, and Longworth did some things which only Longworth would attempt. Longworth does them effectively, too. Pursell once was placed on the goal-line, and he kicked away a shot that Campbell was quite prepared to take. In the second half Pursell made another great save. For three minutes Barnsley were hammering at the visitors’ defence. They were exciting moments. And the wretched part of the business was that Barnsley’s chance came through an alleged intentional handling case by Fairfoull, which was not a foul. Pursell eventually got the ball away through heading out a strong shot.

Two appeals for penalty kicks were made by Barnsley, neither being upheld and neither deserving to be. Only once was there a misunderstanding between the last three lines of Liverpool. That was when Lowe and Ferguson bumped into each other, and Halliwell took up the blunder and shot fiercely. Campbell breaking his heart by the easy way he caught and cleared the ball.

To the captain.
The rare rear quarter of the Liverpool team was not alone in the merit. Fairfoull, Lowe, and Ferguson made a grand half-back line. Fairfoull never wasted a ball. He passes along the ground and gives his wing men every chance to push home a goal. Lowe’s captaincy was useful as his dogged play. He dominated the game with his tremendous heading, his breaking up, and his passes to the right wing. Then Ferguson’s return meant a strong link in the half-back line. Here again the club have a man who sets his forwards going with a ground pass. With an improvement forward and the three “back” divisions of the team keeping up their form of the last month or so, Liverpool would beat most sides.

Miller, while not shining brilliantly, did useful work, and once had the misfortune to be charged full in the middle of the back by Bratley, without getting a penalty kick for it. The fact was the Liverpool team was weak in three links only, extreme wingers and centre-forward.

You say they were lucky, do you? You have doubtless got your opinion through reading criticism. Let me ask you a simple question: Barnsley failed to score  through members of Liverpool playing great football. Liverpool scored although they left their most dangerous shots till five minutes from time. Were Liverpool lucky? Ask yourself now. Campbell is a part of the Liverpool team, and to my mind it is wrong to say Liverpool were lucky. Barnsley were unfortunate in finding Campbell and others in brilliant form, but Liverpool, it must not be forgotten, played over Barnsley for the first half, were riddled for a quarter of an hour after the interval, but came again, and got on top by sheer merit. Liverpool were no lucky. Still, certain of their forwards came near undoing all the good work done by other divisions of the team.

Barnsley’s back were sturdy. Bratley is like Bob Clifford. Forward the inside three were best, Tufnell being artistic, Halliwell fiery, Travers a belting good shot from all angles. Royston, a local, was useful – built on right lines; but Barson disappointed me, and may not fulfil the promise he holds out to our “Tick Tack” merchant, whose company was so valued by our party.
(Liverpool Echo, 16-01-1914)