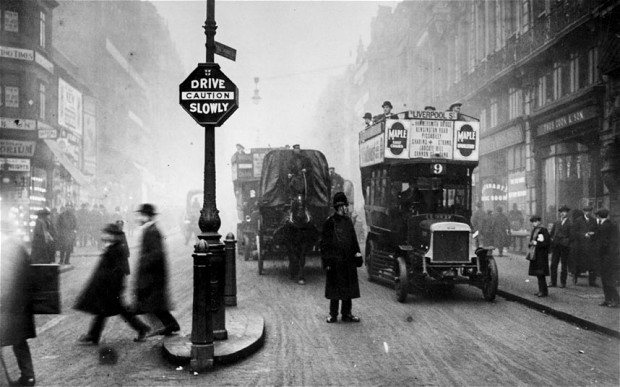 Thursday, April 16 – 1914
An ex-Liver, now in London, sends the following “Don’ts” for the special attention of my readers: –

Don’t forget to secure a comfortable seat in the train.
Remember you’ve got a long way to go.
Don’t forget your “Echo.”
A pleasant restorative to jaded minds.
Don’t annoy the railway officials as to way to the grounds.
Book to Crystal Palace by tube or ‘bus. You’ve no trouble.
Don’t bother with the benevolent chap who asks you to have a bit on the “lady.” Leave him to the “Tecs.”
Don’t forget the adage, “Appearances are deceptive.”
Don’t forget things can be bought cheaper in some shops with a less significant name.
Folks say, “Prices are put on according to appearances.”
Don’t carry valuables when visiting “Petticoat-lane.”
There are some honest traders, but —-
Don’t be alarmed if you lose your silk handkerchief to find it selling at the other end. London’s full of surprises.
Don’t stop in the middle of a London thoroughfare.
The motor-buses won’t.
Don’t stop and look round.
Don’t forget; a Northener can be spotted by his manner of crossing a street. Some people like strangers.
Don’t be afraid to ask a London policeman when in difficulties.
Remember he’s the politest in the world.
Don’t alter your opinion of the Liverpool one.
Don’t argue with a cockney; you won’t understand him.
His dialect, snappy at first, is unrecognisable to the ears of a Dicky Sam.
When in Trafalger Square don’t look for “Bee’s” statue. It’s not there. Neither is “Tedimus H’s.” Not yet.
Don’t look for stopping stations when in need of a motor-bus. There are none. They stop on your beckoning (the buses).
Don’t forget to purchase the Monday’s edition of the “Echo.”
Remember “Bee” will refresh your mind on the match.
Don’t forget “the little ones at home.”

For the benefit of the large number of visitors from Liverpool who are attracted by the great game at the Palace, I have made inquiries at the railway stations, and find that the number of excursions to be run is much greater than ever.

One official said the trip to London for the final was getting more popular every year. First, then, how to get to the capital. The Great Central Company announce a one-day, two-days, and three-days excursion, leaving this city at midnight on Friday.

They have bookings from Southport, Birkdale, Aintree, &c., and will run a big crowd from Warrington and Widnes. The London and North-Western Railway are running a special cheap excursion train to Euston Station, London. It will depart on Friday night at 11.35 p.m. from Lime-street, 11.40 p.m. Edge Hill, and excursionists will have the option of spending one, two, or three days.

There will also be bookings from Prescot, Thatto Heath, &c. The Midland Railway have big bookings for their “three-edged” final tie arrangements. The G.W.R. also have a one, two, or three day ”run,” and from Chester, Hooton, Rock Ferry, as well as Shropshire centres, they will pick up a good number of visitors.

Messrs. Dean and Dawson tell me they have saloons and parties, and will carry 700 persons and see them through the day with meals, drives, &c.

The best way to get to the Crystal Palace is by underground.

Passengers arriving at the following terminal stations should proceed by the underground railways as set out below, either to the Victoria or the London Bridge Station of the London and Brighton Railway or to St Paul’s Station of the South-Eastern Railway, which is adjacent to Blackfriars Underground Station, and book from there to the Crystal Palace.
(Liverpool Echo, 16-04-1913)

You can help me promote this website to other football fans by any of the following ways:

1) Just under the headline there is a note saying “leave a comment.” Please comment, and build a LFC history community!
2) Just above the date for the article, at the top, there is pictured some stars, and the saying “Rate this.” Please rate the articles you read!
3) At the bottom of every article there is a “Share this” for either Facebook, Twitter, Press This, Pinterest, Email, and Google +1. Please share the articles within your circles.