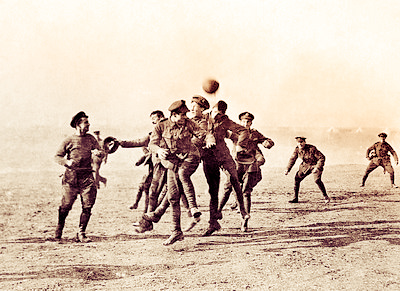 Saturday, January 30 – 1915
Telling how he spent Christmas Day in the trenches, Private Joseph Jackson (28), 1st Royal Warwicks, of Ward Street, agreed that the fighting at Yuletide was not so severe, but, to use his own words, was “quite hot enough to make things uncomfortable.”

There might have been a truce in some parts of the firing line – in fact, he had read accounts of how the British and Germans played football between the trenches – “but truce or no truce,” “I wasn’t fool enough to risk my head above the trench.”

Gifts in plenty were received from friends at home, and generally the soldiers were well looked after.

His Christmas fare consisted of tinned beef, some good old plum-pudding, and dozens of cigarettes. On Boxing Day the artillery were going at it hard and fast, the Kaiser’s men sending over the ‘Jack Johnsons,’ and we were returning the compliment,” when suddenly a shell burst right by the trench, and pieces wounded him in the left leg.

At night fall he was taken to hospital. With soldier-like sincerity Private Jackson spoke in high praise of the care and attention shown by the Red Cross men and nurses to the wounded.
“They looked after us splendidly,” he said.

From Boulogne he was sent to a hospital at Newcastle-on-Tyne, where he remained several weeks.

When called up on reserve, he was working at the sheet mill of Walker Brothers, Pleck Road, and this year will complete twelve years’ Army service.

Two brothers are also serving their country – Private George Jackson (35), who was in the Boer campaign, and has been on active service with the R.A.M.C. from the beginning of this war; and Private Alfred John Jackson (32), who has joined the Shropshire Light Infantry.
(Walsall Observer, and South Staffordshire Chronicle, 30-01-1915)