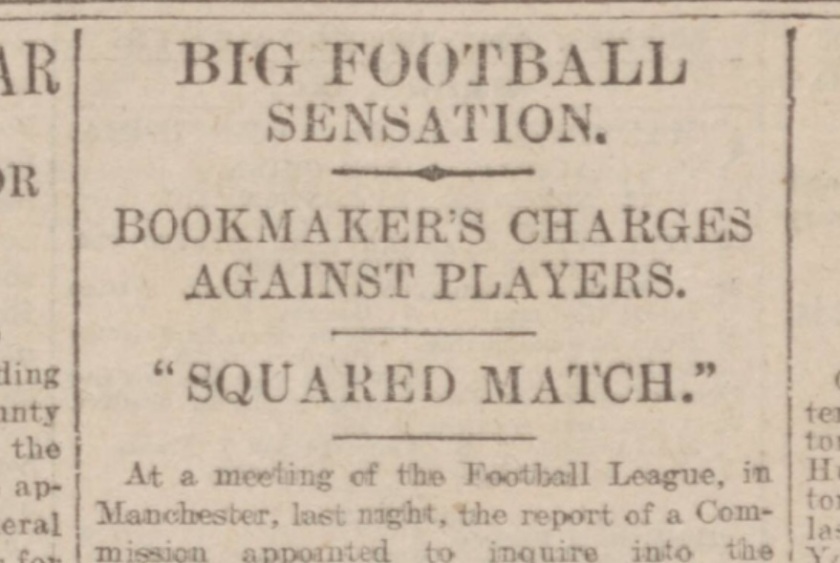 April 24, 1915
The report of commission appointed to inquire into the rumours as to one of two matches played in Manchester during Easter week was received. It was as follows: –

“We have made very careful inquiries and full investigation into certain rumours that an important League match played recently had been ‘squared,’ but, in view of the facts hereinafter set forth, we are withholding any report at present.”

“A football coupon issued last week has been brought to our notice containing the following announcement: –
“We have solid grounds for believing that a certain First League match played in Manchester during Easter week-end was “squared,” the home club being permitted to win by a certain score. Further, we have information that several of the players of both teams invested substantial sums on naming the correct score of this match with our firm and others. Such being the case, we wish to inform all our clients and the football public generally that we are withholding payment on these correct score transactions, also that we are causing searching investigations to be made with the object of punishing the instigators of this reprehensible conspiracy. With this object in view, we are anxious to receive reliable information on bearing on the subject, and we will willingly pay the substantial reward named above to anyone giving information which will lead to punishment of the offenders.

“The coupon referred to is issued by ‘The Football Kings.’ The allegations referred to are not made in connection with any particular match, and may refer to either of two.
“We can readily understand the serious unwillingness of bookmakers to be robbed by a conspiracy on the part of players, and we are just as determined that League football shall not be degraded, disgraced, and ruined by such reprehensible practices as those referred to in the coupon under notice.
“If, as stated therein, direct bets have been made by players, such conduct is contrary to the rules of the F.A., and, in accordance with declarations by the F.A. and the Football League, any such player found guilty would be put out of football for ever. The conspiracy alleged is a criminal offence, upon which the aggrieved parties can take action.
“If the injured parties are not prepared so to act and will furnish us with any information justifying such allegations, or either of them, we are prepared to pursue our inquiries to the utmost, and fearlessly impose adequate punishment, and anyone willing to supply any information should communicate with the secretary of the Football League, Mr. T. Charley, Castle-chambers, Market-place, Preston, at once.
“There is one further alternative. If the party responsible for the issue of the coupon referred to will publicly state the match referred to and furnish us with his name and address, thus accepting responsibility for the publication of such coupon, the twenty two players concerned will immediately take action for libel and test the whole question in the courts before a judge and jury.
“If this challenge is not accepted within fourteen days we shall know what construction to place on the anonymous allegations, and shall issue a further report based upon our investigations. – (Signed) J. Lewis, H. Keys, C.E. Sutcliffe.”