June 11, 1915
Liverpool F.C. spent half an hour with their shareholders last night, and the time was well and quietly spent, and in pleasant contrast to some annual meeting that I have had to attend.

There was no election, and the shareholders attended strictly to business questions until the close, when a shareholder (now resident in Crewe) thought that their club should take not of the Football League Management Committee’s work in connection with the game last season. Thus, the Liverpool Club was the first club to recognise the stupendous work done by that able committee.

The shareholder pointed out that the papers of the South scared people and tried to ruin the sport. He was glad to note that the football writers in the North had adopted a sensible method, and had resisted the claim of the South. 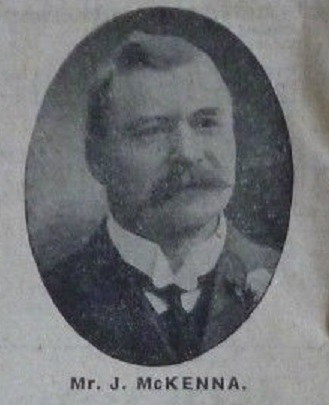 Mr. John Asbury (chairman of the club) made reference to the death of Mr. Tom Watson, manager and secretary of the club. He said that there never was a better secretary, a straighter man, or one in whom directors had more trust.

Mr. John McKenna proposed “That the shareholders desire to place on record their deep regret at the death of Mr. Tom Watson, who was for almost nineteen years the highly appreciated and esteemed manager and secretary of the club, and convey to his widow and family their sincere sympathy in their bereavement.” Mr. John McKenna remarked that Mr. Tom Watson was an honest and faithful servant of the club. 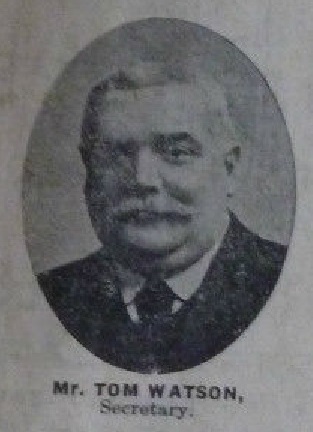 Mr. Samuel Hayes, who seconded, said no secretary throughout the length and breadth of the country has done more for a club than Mr. Tom Watson did for Liverpool.
The resolution was carried in silence, all present standing.

The Chairman, in proposing the adoption of the report and accounts, said the past season had been a very strenuous one. Their “gates” had been very considerably reduced through the war. They had thought that football was necessary because everyone was not eligible to go to the front, and that there ought to be some amusement to occupy the time and thoughts of those not able to go to front.

As regards football for the future, his hearers probably knew as much as he did about the matter. They would have to wait until next month for the meeting of the Association and the League before they knew whether football would be played during next season. Certainly as appearances now were, football would not be carried on, but should anything sudden intervene on the Continent to cause a collapse of the war, there would be football.

During the past season, knowing that the income would be reduced, they did not go in for high-priced players. Money was also saved by the directors refraining from doing a lot of travelling in looking for players. The directors had economised wherever they could, otherwise they would not have been able to show such good financial results.

Mr. John James Ramsay seconded the motion, and after a discussion upon details in the accounts the report and balance-sheet were adopted.

On the proposition of Mr. William Robert Williams, authority was given for payment of a dividend at the rate of 5 per cent. per annum on the paid-up capital, upon a date to be fixed in the discretion of the directors.
Messrs. Simon Jude and West were re-elected auditors.
Messrs. William Coward Briggs, John Keating, and Albert Worgan were reappointed directors.

Mr. Asbury publicly acknowledged the work of the directors and their “support to the chair,” and William Robert Williams gave some interesting, though not new, news regarding the dividend. Altogether it was a most happy and successful meeting, and shows how well-wedded the Liverpool Club is.
(Liverpool Echo: June 12, 1915)