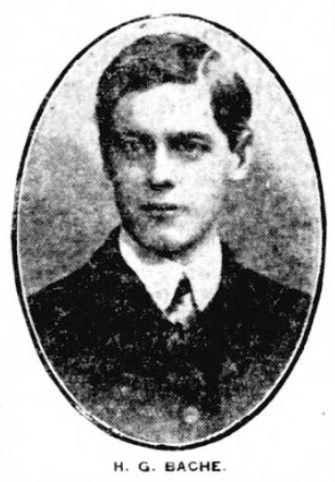 In October, 1914, H.G. Bache enlisted in the Lincolnshire Regiment with a “Pals” battalion formed by his brother Councillor C.S. Bache, who was then Mayor of West Bromwich.

After some months he secured a commission, and was attached to the 10th Lancashire Fusiliers, with whom he had been in France a few months. He was about twenty-five years of age.

An all-round athlete, H.G. Bache could hold his own in the best company at cricket, lawn tennis, and hockey, but it was as an Association footballer that he excelled. A clever centre forward, and usually a deadly shot, he gained his “blue” at Cambridge, was a valuable member of the Corinthians F.C., and gained international honours.

A couple of seasons ago he assisted West Bromwich Albion, and when he was in the side the “Throstles” were generally successful.

At King Edward’s School, Birmingham, “H.G.” was a great athlete. He played in both the “Soccer” and “Rugger” teams, captaining the Rugby second fifteen when they went through a season without meeting with defeat.

In other branches of sport he was to the fore, and when he left the school to proceed to Cambridge he took with him seven cups and many medals as mementos of his achievements.

In his first year at Cambridge he received his “Blue,” playing centre forward. Always popular, he became captain of the Cantabs, and in one season scored forty-two of the eighty-five goals they obtained.

He played for England in Amateur International matches against Wales, Bohemia, Spain and France, while as a member of the Corinthians he toured in Canada and on the Continent.

At Cambridge he had a big reputation as a lawn tennis player. He won the championship of his ‘Varsity, and helped to beat Oxford.

At cricket also he did well. He retired after scoring 137 in the Freshmen’s match in 1909, and in the following season played a non out innings of 102 in the seniors match, but he was not considered good enough for a cricket “blue.”

On several occasions he assisted Worcestershire in county matches, and he also helped West Bromwich Dartmouth in some of their Birmingham League engagements.

As a member of the West Bromwich Hockey Club he ranked among the finest forwards in the Midlands, and he played for Staffordshire in several county games.

All Midland sportsmen will regret to hear this sad news concerning a popular member of a family which has been associated with West Bromwich for a long period.
(Sport Argus: February 19, 1916)

There are some differencies to the actual date when he passed away, either the 15th or the 16th of February. You can ready more about H.G. Bache here.