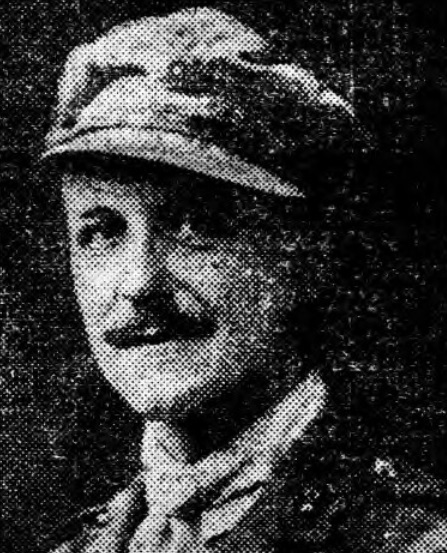 Major Dargie, who was 26 years of age, was educated at St. Deiniol’s School, Bangor, under the later Mr. Dingad Davies, and at Grove Park School, Wrexham, which he left at the age of 19 years to join his father’s business at Bangor.

While at Wrexham he achieved more than local fame as an athlete, and in that respect was leader of his school. His prowess in the football field was noted by the committee of the Wrexham Town Club, who invited him to play for them, though at the time had he had not attained his nineteenth birthday.

After removing to Bangor he cast his lot with the local team, and it is no exaggeration to say that his advent gave a much needed impetus to football in the city. A centre forward with a deadly shot, he became a terror to opposing goalkeepers, and as a dribbler he had few equals. His physique stood him in good stead on the football field, but though capable of using his weight, he always “played the game,” and never descended to any doubtful tactics.

For several seasons he captained the team, and he also had the distinction of playing for Wales in the amateur international matches on more than one occasion. On and off the field he endeavoured to maintain the best traditions of the game.

About twelve months before the outbreak of war he joined the Territorials (RGA), and was gazetted lieutenant. He proceeded to France in March, 1916, and on arrival in that country went straight into action with his battery, through a blinding snowstorm. In October, 1916, he was promoted Captain, and last June, on being placed in charge of a new battery, he was appointed Major – a striking testimony to his efficiency as a soldier. He was home on leave last month, when he celebrated his 26th birthday.

Major Dargie has two brothers serving, Lieutenant Fred Dargie (RGA) and Lieutenant David Dargie (RGA), who came to this country with the Canadians, and is now at the front. Both have been wounded.

Tributes from officers and men
Writing to his parents, Lieutenant Branazon, states: – “It has been a big blow to us all. We were subjected to a lot of shelling on and off during the day. About 7 pm your son was in the trench just outside the dug-out giving orders to a few men, when a shell landed and killed him outright and wounded four others. Everything that could be done was done for him. Although he was so badly hit, he looked as if he was asleep. He was loved by all. A fine gunner, he was one of the best commanding officers I have had the pleasure of serving under.”

Major H.A. Lewis, RGA, in a letter states that the shell broke practically at Major Dargie’s feet, killing him almost instantaneously, and wounding two others, who had since died. “His death was painless,” added the writer, “and he died as he would have wished to die, fighting with his battery and facing the Hun. He was a kind, courageous British gentleman, always cheery and very willing. He will be missed very much by his battery and by all who knew him.”

Sec-Lieut. Whalley, in a letter of condolence, mentions that Major Dargie and himself had been joking only a few minutes before the shell landed; in fact, he had a narrow escape himself from the same shell.

A Chaplain wrote as follows: – “Dear Mr Dargie, – I am quite a stranger to you, but I feel I must write to offer you my real sympathy in your time of trial. I knew your son quite well, and he was one of the bravest men I have ever met, and I have met many brave men. Some months ago it was my lot to be with him in some great danger, and I shall never forget his cheery courage, and I know how it helped me.

“I went to see him the very evening he was killed (though, unfortunately, I missed him) in order to arrange a service with his battery. He was always so keen that I should come, and he gave me all the help in his power. The service was arranged for to-day, and, of course, we held it, and you may be sure that we all had him in our mind the whole time.

“Indeed we prayed for him by name, and also, for all who mourned him. It was extraordinary the hold he had obtained over the affections and loyalty of the men of the battery, though he had not been with them long. I buried him yesterday in a large British cemetery.”

Major Brymer (Carnarvon) wrote as follows: – “It is with feelings of the greatest sorrow that I write to offer you and Mrs Dargie and family my deepest and heartfelt sympathy in the terrible bereavement which has befallen you. At the request of all officers, N.C.O.’s, and men of this unit, I also beg to offer their feelings of sincerest sympathy.

“By the death of Arnold I have personally lost a dear and beloved friend, and all my officers and men alike have lost a personality which they respected and admired. . . his sterling qualities . . . This after I, with three of my officers and a party of NCO’s and men attended the funeral in . . . British cemetery a few kilos away. The funeral was also attended by officers and men from Arnold’s unit, and you may rest assured that it was carried out with all reverence and respect.

“It will also afford you consolation to know that his grave will be looked after with all care and devotion. We sang a well-known Welsh hymn over the grave, a last tribute we asked to be allowed to pay to a respected officer. I feel I cannot convey to you the feelings of sorrow which are within me. Arnold was such a fine honourable man, He had made himself so well liked by all who came in contact with him, and he had made such a wonderful progress in his work that the thought that he has been struck down leaves one stunned.”

A Bombardier from Major Dargie’s battery, in a letter of sympathy, speaks of the way he had endeared himself to the men.
“He was always so kind and appreciative and considerate in every way. He had shown himself to be a commanding officer whom the battery loved, and on whom we could rely. He was so cheerful and happy in his work.”

Gunner W. Donaldson, son of Mrs. Donaldson, the Market Hall, who was in Major Dargie’s battery, writing home to his mother, states that Major Dargie was only about fifteen yards from him when he was killed.

“I will really miss him,“ states Gunner Donaldson, “as we were such good friends, It was a terrible time for us. Four others were wounded, and I helped to carry them to the dressing station, the Germans shelling us all the time. I have been asked by one of my officers when my leave comes off to take Major Dargie’s little dog home to his relatives.”

Brilliant football career
A football correspondent writes: – As one who watched Major Dargie’s football career, may I be allowed to lay my chaplet on his tomb? If my memory serves me aright, Dargie, then a schoolboy, first played at Bangor against the Citizens with the Wrexham Combination team.

His school days over, he joined father in business, and cast his lot with the club of his native town, though Wrexham were very anxious to retain him. He had not played in many matches for the Citizens ere his fame spread far beyond the confines of Bangor. Dargie became a name to conjure with. When, as captain, he strode out of the dressing-room, leading his team- a fine specimen of manhood, the hopes of the supporters of the local club reached their zenith.

Speculation became rife as to the number of goals he would score. Given an opening, woe betide any goalkeeper who tried to stop his shots. More than once the force of his shots not only sent the ball into the net, but the unfortunate goalkeeper as well. Equally at home in any position – centre-forward, full-back, or even between the sticks, he could always be relied upon, and he was such a “sport” that, if necessary, he would turn out with the Reserve team.

To the end he retained his Amateur status and frequently played for Wales in Amateur International matches, and also for a short time with Liverpool Reserves. Fame inevitably brings its penalty, and after playing a few seasons, he was scarcely able to touch the ball before several opponents were round him like bees – and irritating practice, but he never seemed ruffled. On and off the field he was the same straight lad.

Well, Arnold, you have played your last game in a contest where the trophy is the liberty of nations. You have gone under before the referee has signalled “Time up,” but you have left behind you the fragrant memory of one who, to the end, “played the game.”

Memorial service.
Arranged by the special request of the YMCA Committee, a service in memory of Major Dargie will be held at Prince’s-road Church, Upper Bangor, next Wednesday, at 7.30 pm.
(Source: Denbighshire Free Press: September 28, 1917)

Another loss to football, though it has but a slight connection with Liverpool F.C., owing to the fact that Arnold Dargie played but a couple of games for the reserve team, is the death of Major Arnold Dargie, of Bangor F.C. He was a terror to goalkeepers, and Wales soon favoured his inclusion in the amateur international side. One season he scored over 100 goals for Bangor. Yesterday his father had news of his death, and also of the fact that Welsh soldiers gathered round his grave and sang the Welsh hymn “Beth sydd i mi yn y byd” to “Aberystwyth. “
(Source: Liverpool Echo: September 24, 1917)