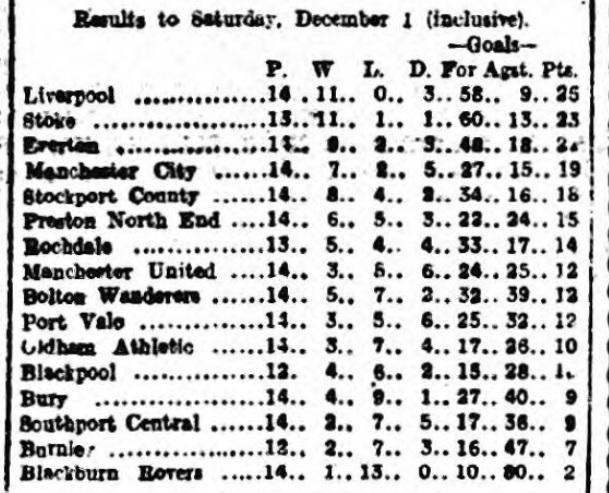 Monday, December 3 – 1917
Thanks to an innate sense of sportsmanship, the Liverpool team fought a fair and chivalrous game against Blackburn Rovers at Ewood Park, on Saturday. The world famous club has recently fallen upon very evil times in the way of finding players, and in the meeting under notice the Anfielders found themselves opposed to an eleven composed for the most part of inexperienced juniors.

It would have been the easiest thing in the world for Tommy Bennett and his fellow-forwards to have piled up a cricket-like score of goals, but they preferred to be as merciful as they were strong, and contended themselves with half a dozen.

The Blackburn youngsters set the pace with characteristic impetuosity, and scored a rattling good goal a few seconds after the kick-off. The Anfielders, indeed, appeared to be taken completely by surprise when Jackson netted with a well-judged effort. Once they settled down, however, it was obvious that there was only one team in the hunt, and Bennett having equalised, the game practically became a walk-over. The Rovers stood up gamely for the first twenty minutes, and then they were never really in the running.

Under the circumstances it will be understood that the football, though interspersed with many clever and pretty pieces of foot work, was rarely serious, and need not be dealt with at any length. Harry Lewis gave the visitors the lead, and the subsequent goal-scorers were Arthur Metcalf, Robert Waine, Tommy Bennett, and Donald Mackinlay.

The Liverpool centre-forward gave a delightful display of his trustful powers, and time after time he “walked through” the field and finished leniently wide of the mark. Mackinlay also submitted a wonderful exhibition of cleverness at half-back, some of the touches between him and George Schofield being particularly smart. Of the Rovers, it is only necessary to say that they showed great gameness against overwhelming odds.
(Liverpool Daily Post, 03-12-1917)