June 25, 1921
Kenny’s troubles as linesman.
Club colours cause a disturbance.
Amusing experiences with Liverpool on the continent.

“Kenneth Campbell, Partick Thistle’s International goalkeeper, in the story of his experiences, exclusive in the ‘Weekly News,’ relates some unusual incidents when with Liverpool, for whom he played for over eight seasons.”

In my article on the Cup final last week I omitted to mention that the Liverpool Directors had invited to London all the players’ wives, sweethearts, or friends to be their guests from the Friday prior to the tie, and they were with us until the departure on Monday morning. Can you wonder that we had a jolly time on Saturday and Sunday nights?

We had another look at the Cup on the Monday morning, as Burnley travelled home on the same train as our crowd.

And, strange to say, we saw the trophy again a third time. We played Burnley at Anfield on the Wednesday in a game for medals of some sort, and for some reason or other they brought the Cup with them. Perhaps they wished the Liverpool people to see exactly what they lost on the Saturday.

Any way, we had our revenge (if there can be such a thing as ‘revenge’ in football), for we beat our Lancashire rivals by the same score as we lost by in the final – one to nothing.

But we had a greater consolation than that, for, to our unbounded satisfaction, we found that our supporters had not deserted is. Indeed, if anything, we were more warmly welcomed by our own people than ever we had been before. And that meant a lot.

I must mention, before leaving the subject of this never-to-be-forgotten final, a most unique experience I was introduced for the first time to a blind man who “saw” the match.

This was a Mr. Meredith, who had been taken from Manchester in connection with the National Institute for the Blind, to place on record his impression of the game.

What a blind man “saw.”
He told me that for twenty-five years, except when illness prevented, he had not missed a football match on a Saturday afternoon. During our conversation I found out that Mr. Meredith had mastered the detail of football thoroughly, and had developed an almost uncanny instinct, which enabled him to follow the course of a game almost from start to finish.

I asked him to furnish me with an impression of the game he had just “seen,” and so struck was I with his marvellous accuracy that I noted down his description. Here it is: –
“I liked Liverpool’s outside right, Sheldon, very much,” he said. “He is a great forward. But I think he spoils many a good efforts by holding the ball too long, instead of sending it to the centre. I was not favourably impressed with the play of Miller, Liverpool’s centre, as in many instances he was very slow. I have ‘seen’ Miller at his best, and he was a long way short of it today. Metcalf and Lacey were untiring workers. I could gather that Lacey was too well watched to be very dangerous. Nicholl, the outside left, had a good many runs, but his finishes were apt to be erratic.

“Kenneth Campbell, you yourself, sir, I fancy played an absolutely great game. The ball had only been kicked off when Mosscrop, receiving the ball from half-back ran along the wing, centred accurately, and someone, I know not who it was, shot in. Where you came from I could not tell, but you made a miraculous save. I will give you another instance of your excellent goalkeeping. Once, in the second half, the Burnley forwards were in line, full cry for goal. A hot bombardment took place, and three shots were directed at goal. But you saved wonderfully on each occasion.”

Needless to say I treasure that criticism, coming, as it did, from a person who had never actually “seen” me, and could not of course, have been biased in any way by my personality.

We are taken for socialists.
During the close season that followed, our club was invited to tour Sweden and Denmark. How we looked forward to that trip! Great preparations were made.

I remember Tom Watson, ever ready to further the interests of the club he had so much at heart, sent us to a firm of hatters in Liverpool to get rigged out in the club colours.

We got straw hats, all the same style – different sizes, of course – embellished with ribbons of the club colours, and we had wide ties of the same colour.

Now, our club colour, no need to tell you, was red – brilliant, glaring red – and this led to an extraordinary scene when we landed at our destination. We left Harwich and travelled by boat to the Hook of Holland, and over the boat journey let me draw a veil.

On arriving at the Hook, as we came off the steamer were very much astonished to find our disembarkation the subject of much comment. It led, indeed, to something of a “demonstration.” Of course, it pleased us very much to think we were recognised as the famous team which had just fought – and died – in the final for the blue ribbon of English football.

But we were soon to be disillusioned. When we all finally got landed the crowd of shoremen and loafers gathered round us and sent up a shout, “Vive les Socialists!” – “Vive les Commune,” or words to that effect. It did not take us long to discover that our red bands and red ties had led the natives to imagine we were a delegation of Socialists!

That finishes the hats and ties. The first shop we came to we made that all right. But you couldn’t mention a red tie to poor old Tom Watson for many a day after that.

Our journey through Holland was very pleasant and we were particularly tickled with the flatness of the country and the number of canals.

When we arrived at the borders of Germany, we found even then that everything seemed t be under the charge of the military. Remember this was months before war actually broke out.

Not only was our luggage searched by the Customs, but it was taken away and locked in a room. So were we until the soldiers had searched every nook and cranny in the compartments. No matter if Mr. Watson raved and swore, it made no impression. We had to wait the pleasure of the Kaiser’s mandarins, who seemed to take a special delight in giving us annoyance.

Dined on horse flesh.
Going through Germany the train journey was fairly pleasant, but there was one thing that stuck in our throats – figuratively and literally. That was the food. Our boys got it into their heads that at dinner time we got nothing else but horse flesh, and some of them fairly sickened. Waugh! I think I feel the taste yet.

During our short stay in Hamburg, we decided to have a drive. Of course we could not speak German, but we sent over to the cab stand. Tommy Fairfoull undertook to make them understand what was wanted. We wanted taxis, some splendid specimens of which we had seen flying along the streets.

We didn’t want them of course, and refused to trust ourselves to the antiquated relics. This led to trouble. They brought over a policeman, or the equivalent of a “bobby” in Germany, and there was a jolly old row.

In the finish we had to pay for the cabs coming off the stand. If these drivers could only have understood half of what we were calling them I fancy we would all have landed behind prison bars.

Eventually through Cook’s man we got taxis, and had a drive round the sights. It being a new experience for most of the boys, I need hardly tell you we let ourselves out. We took to the Lager like ducks to the water, and I shouldn’t like to say at how many cafes we stopped. So enamoured were two of our party with the Lager that they took on a bet as to which would drink the most.

They drank until one fellow gave in, and by that time the German waiter’s hair was standing on end at the thirst of the combatants.

My experience as a linesman,
At one of our matches I had a most unpleasant experience. In this particular game I was not playing. It was a game with the pick of Denmark, and our boys had been enjoying themselves thoroughly on the Saturday night. Most of our matches were played on Sundays.

Well, as I have indicated, with our lads having a night out the previous evening, the natives thought it would be a walkover for the home team. But it was the other way about, which was most unfortunate for me.

You see, I was linesman. Young Scott – now the regular ‘keeper for the Reds – was in goal.

Now, I never had any inclination to take an official job on the football field. I was quite content to take my place in the team, but, you see, circumstances landed me in for he job.

Naturally, with their team getting well whacked, the crowd got very excited, and it was evident some if my throw-in decisions were not going down. I did not worry over much until they started waving umbrellas in my face, and shouting all sorts of things at me. I am rather glad I did not understand Danish, because I am sure they were calling me anything but an angel.

I can tell you I was thankful when the game was finished.

Notwithstanding several little incidents of this description, we thoroughly enjoyed our trip.

Next week another splendid instalment of Campbell’s story.
(The Weekly News: June 25, 1921) 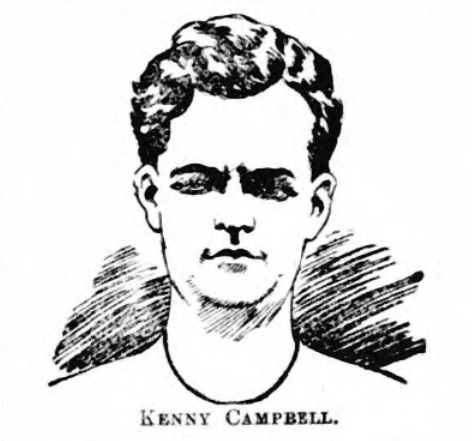