October 13, 1923
Key note: “The second of the local ‘Derby’ games between Liverpool and Everton ended in another win for Everton. The score at Anfield on Saturday was slightly different. Everton gaining the verdict by 2-1, as against 1-0 at Goodison the previous week, but the general conclusion was the same – that Everton were the better side, and well worth their victory. Thus in a season have Everton tarnished Liverpool’s record of post-war success at both Goodison and Anfield. Saturday’s contest was in keeping with the high standard set the previous week, and of hard honest football. The season’s local games have been fine examples.Liverpool made two changes, Lucas displacing Ted Parry in the defence, and H. Wadsworth taking the place of William Lacey, who was ill.These changes mattered little, for it was the half-backs who controlled the game and decided the issue. Everton’s strength was Liverpool’s weakness, and the game turned in Everton’s favour chiefly through the masterly display of their middle line.” (Liverpool Daily Post: October 15, 1923)

Sketch from the Liverpool Daily Post and Mercury, October 15 – 1923 (thanks to Billy Smith). 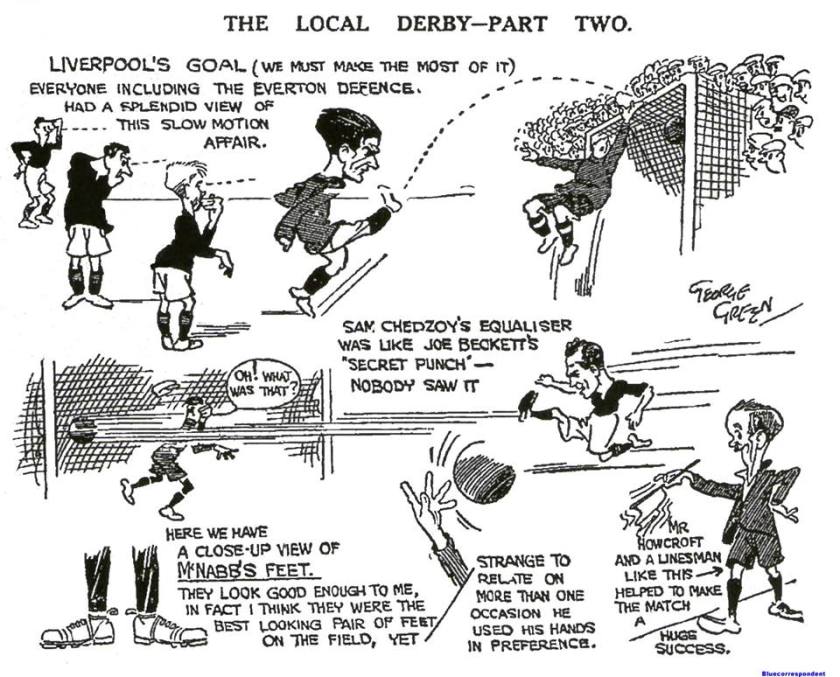