Monday, August 1 – 1927
Admirers of Queen’s Park were last season delighted with the play of their favourites. There was no exodus at the season’s commencement of players to professional clubs, and, as a consequence, a good blend was struck. That this season will be equally pleasing is almost certain.

All the players who gave Queen’s a safe position in the League table last season have been re-engaged. Applications from enthusiastic boys pour in to Mr. Hector McKenzie, the secretary, begging for trials. Some of them will receive consideration, and it is likely that any new players will be recruited from school’s football, or even from the churches and boys’ brigade leagues.

Last season Queen’s Park improved a great deal in every way. In W.S. Chalmers they have discovered one of the finest inside forwards in Scotland. International honours are practically certain to come his way if he stays in the game. W.S. King is another young Queen’s man who has taken the fancy of experts. A left half-back, he is exceedingly clever constructor and breaker-up, very little behind such exponents of half-back play as Tom Muirhead and Bob Bennie. 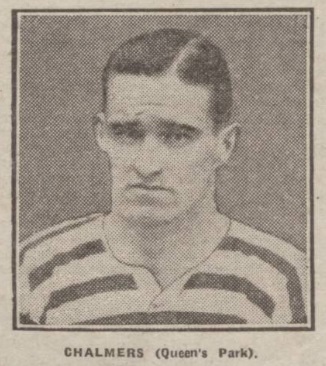