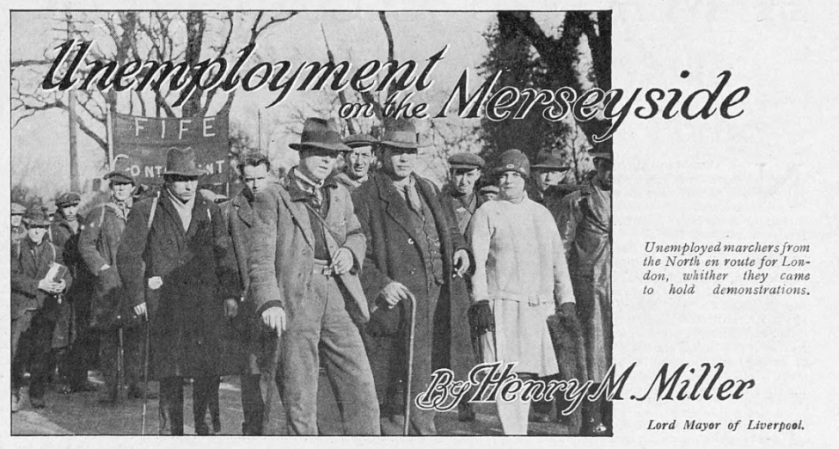 Friday, March 1 – 1929
To write about the problem of unemployment is not a very easy or exhilarating exercise at the present time, for there is not much in the position which would promote optimism; still, as public men, we have to face the situation and endeavour to see a way through it.

Liverpool’s pathetic plight.
According to official figures, Liverpool (in which we will include Bootle) shows the second highest figure in volume of unemployment in the Kingdom – e.g., Men, 44,581; Woman, 6,654; Juveniles (i.e., persons under 18 years of age), 3,312.

Another striking fact is that there is a ratio of 549 per 10,000 of our estimated population in receipt of Poor Law Relief.

It must not be supposed that there are figures expressing a passing phase, for, with slight variation, they have been a feature of our condition during the past seven years.

To what can we attribute this distressing state of affairs?

One important factor is that Liverpool is not a great manufacturing centre. We are dependent largely upon the state of the trade and industries carried on in the country generally, and particularly in the North of England. There is hardly a staple manufacturing industry in Liverpool which influences employment. Being a shipping centre Liverpool is particularly interested in the import and export trade of the country, and that is the barometer of Liverpool’s prosperity – of the rise and fall.

As, too, we are shipping centre, much employment is of necessity “casual,” and although the question of “casual” work is being dealt with in as practical a manner as possible by our ship-owners and others, it will always be more or less a problem in places like this port.

Such manufacturing industries as we have are not capable of immediate expansion which would make a call for a larger number of operatives. Another factor which affects juvenile employment is the depression which exists in the shipping industry, where we find considerable tonnage laid up, and which in consequence prevents the absorption of juveniles who have left school and are waiting to be apprenticed.

There is, too, a strong disinclination against emigration and the enticement of the dole and the consequent inertia which it produces tells against a desire to seek work in other countries, though it is true that a city like Liverpool, which is not dependent entirely upon staple industries as are coal, cotton, iron, and steel, is less subject to scenes of serious depression because there are outlets for employment of a temporary kind.

More factories wanted.
He is a wise man who would be able to prophesy what is going to happen in this matter and suggestions for remedying unemployment may come glibly from the tongue without being of great practical value. I would, however, put forward the suggestion that the volume of unemployment in this city and district might be reduced if more factories could be established on Merseyside.

Formerly the establishment of factories in areas was carried out to escape high rates operative in towns. The de-rating scheme may have some effect upon this, but this cannot be felt for some considerable time.

A general improvement in the trade of the country would have an immediate effect upon sea-ports like Liverpool. With a great increase in electrical development it may now be possible to erect factories and create industries in towns as against the former custom of planting them near coalfields. Electricity can now be carried to, or generated by, any locality, a fact which may have a very important effect in this connection.

In my view the problem of juvenile unemployment should be seriously taken in hand along with the question of emigration. Whilst the dole must of necessity be given under present conditions to a certain number of men and those particularly with families, is it not time that some sort of compulsory scheme should be put into force with regard to the number of unemployed young people. Should they not have it pressed more closely upon them that one of the few alternatives left for them is to emigrate and this relieve the pressure at home?

Closer industrial co-operation.
It has been said that the foundation of new industries in the South of England, and particularly for the production of luxuries, is due to the fact that Trade Unionism is not as lively a factor there as in the North, but there seems some question whether this is true.

One course which would tend to relieve unemployment would seem to be a closer and more sympathetic co-operation between employers of labour and Trade Unionism – a common pulling together for the general good – a sinking of immaterial differences and small points, with a view to a permanent progress for the good of the country in general.

In my opinion there are distinct signs of such a desire on the part of many leaders on both sides, and the sooner such coming together and elimination of minor matters of detail in favour of broad principles is effected, the better for the whole of the country.
(Britannia and Eve, 01.03.1929) 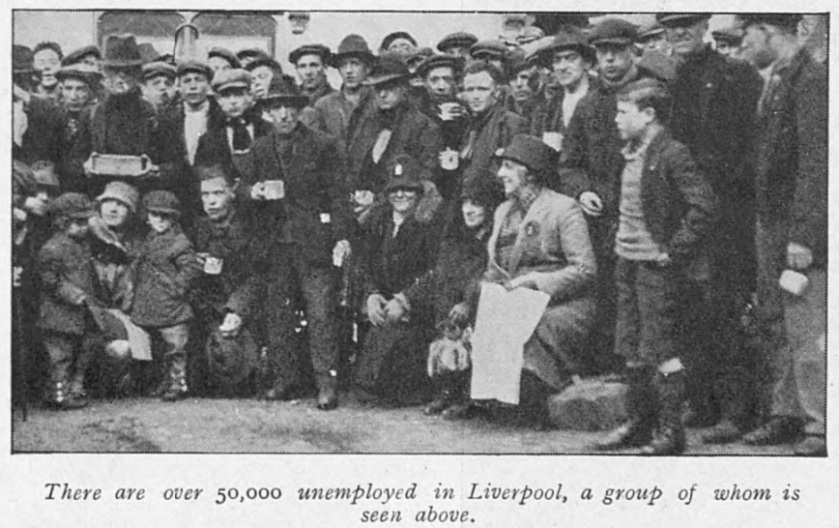