December 15, 1930
Their knack of fighting back.
Here we are nearing Christmas, with 18 matches in Arsenal’s record and only one lost. All sorts and conditions of teams have tackled them, but only one has got them down. That was Derby County, whose victory I witnessed, and who achieved it by taking the Arsenal by storm. This sort of thing one expected of Liverpool, and, to tell the truth, I went to watch this match because, rightly or wrongly – and probably wrongly since it is cogitation concerning the Cup – these two teams have appealed to me as likely to make their mark in the knock-out battle, whose first big shot will be fired by the draw-makers this afternoon.

And because I thought Liverpool might be capable of playing in the Derby way and of knocking out the Arsenal before they got going.

Nearly, but not quite.

Sensational start.
Liverpool got the first blow in, and with a Carnera-like clout calculated to shake any side. While the first 60 seconds were ticking away James spread his elbows to keep Bradshaw off the ball, the free-kick was driven into Arsenal’s goalmouth; the ball rolled bac towards the right half back 25 yards out; and one, two, three – Morrison took strides and hit it for all he was worth.

The ball in the far top corner of the net and Master Morrison had scored the first goal he has ever scored (I’m told) for Liverpool and the finest he will ever score.

Perhaps a bit speculative. But like that putt of mine from the edge of the green, the aim was to get the ball in, and in it went. Just like Derby, only a little more emphatic!

No knock-out.
And, just like Derby, Liverpool went at it hammer and tongs to deliver the second and knock-out Wow. They raided and stormed, and stormed and raided, hut the Arsenal citadel did not fall again. There were half a dozen escapee and halt dozen explosions from the crowd, but not a goal.

Fluffed!
Another goal might have put Liverpool on top of the world, such virility did they develop. It ought to have come on the stroke of half-time. The ball skidded in the mud past a defender, and Smith found himself all alone with only the goalkeeper to beat. The way he fluffed that drive! The golfer would cuss himself and mumble “I can’t keep my … head down to-day!” A case of eye off the ball it looked to me, anyway. And as the crowd’s cynical roar crackled in his ear-drums Smith must have felt like sinking into the earth.

So Liverpool didn’t get that second goal. And the change of ends soon showed that their heavy artillery had not thoroughly done its job. For the Arsenal now took the initiative more frequently.

In five minutes Jack nearly scored – from the inside left position. In 25 minutes he took a square pass from James very near the same spot and tapped the ball through; the Secretary for Statistics says it was his 199th League goal.

Then Liverpool had to fight to keep what they had got, although near the end Smith almost pulled the other point out of the fire.

Three stars.
The Arsenal have bearded another lion in its den. A draw, from their point of view, was a thoroughly satisfactory performance. They were just about worth it, although Liverpool may have other views. There was more class in their work; a higher standard of football skill.

But one thing they did not achieve. That was the worrying of the Liverpool defence by their special brand of attack. This was because Bradshaw primarily, and Lucas, at other times, blocked Lambert’s raids on the goal.

There were two or three men who attracted me in this match. One was Bradshaw, who played a delightful all-round game and was more like the Bradshaw of his best Bury days. Another was Hapgood. What a grand young back. What a fighter. How he revels in work. He gets it, too, in this Arsenal team.

The third was James – the man who can beat his opponent on football’s “three penny bit,” and next moment swish away a pass of delightful subtlety and consistent accuracy.

I can understand why London turns out to watch James play. He is so well worth watching. Mark how he gets his body between his opponent and the ball. And if an opponent decides on a first-time charge to break down this barrier, very often James ain’t there!

Lively Liverpool.
But I want to commend Liverpool on their first-half display. It was full-blooded – all English in style. Really they should have had that second goal. When in the second half, they could not quite keep up this pace, they were seen to be short of forward skill at close quarters. Too few of the forwards could deceive an opponent. Yes, the open game is Liverpool’s game.

All the defence came out of the test well. But it was the half-backs who bore the brunt of the work. Bradshaw was artistic, and the wing half-backs game fighters, McDougall also getting his wing passes though nicely at times, though prone to over-kick his forwards.

Behind, Lucas intervened wonderfully well, which means that, with Jackson also there, Liverpool had a pair of backs who were constantly chipping in. I felt that if Arsenal could have plied the wing men more and made the backs run they might have done better, but Liverpool’s half-backs interfered with such schemes.

The forwards fought a fine fight with a game defence, and there wasn’t a nasty moment in a match that fetched perspiration from every pore. They were handicapped, however, by a weak outside right, Barton (understudy to the absent McRorie) has no yet reached First Division standard. Consequently Hodgson must have found it hard work.

In a level line, perhaps, Hodgson and Hopkin were the pick, Smith being unable to get rid of Roberts, and Macpherson working well but finding the defence worthy of his steel. Perhaps I have not seen him at his best, but Smith has not really shaped like the owner of sensational Scottish scoring feats when I have watched him play.

Lucky?
Arsenal have a big heart. The defence saved them in the first half, and afterwards their star forwards shone enough, if spasmodically, to pull them through.

Harper did not leave his big kicking in America. Over the half-way line with the ball is his aim with goal-kicks, and he can still put it there if it weighs a ton.

At back, Hapgood outshone Parker, while at half-back there was quality and strength. They tell me Roberts came out of a gunsmith’s shop. He joined an appropriate team.

In attack, James was the master mind, Jack being less effective. The Lambert gun was less powerful than in any Arsenal match I have seen this season, and because of Liverpool’s keen positional play and tackling there were no star performances on the wings.

Yet Arsenal got a point. Liverpool may call them lucky. But can you say that when they are doing this sort of thing week by week?

And the band kept on playing. 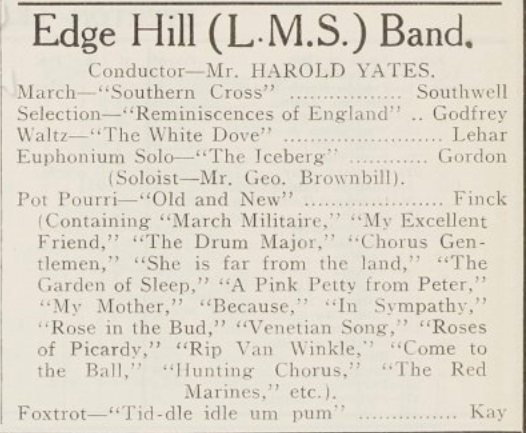