December 29, 1930
Finish with a flourish.
No sign of staleness at Blackburn.
One had read so much of the alleged hardship on well-trained and well-fed professional footballers that it was quite refreshing to witness a match on the third day wherein play was more strenuously fought in the concluding stages.

The play in the first half at Blackburn was merely so-so, but we had a pleasant change after and in the last 20 minutes with the score 3-3 we had as keen a match as one could wish for.

The honours of the drawn game went to Liverpool, in my opinion. In the first half they had to face a very strong breeze, and though they were more or less on the defensive throughout the half, they actually scored twice against the Rovers before the interval.

Moreover, one of the Rovers goals was one of the simplest affairs imaginable, Rankin put forth a long shot from over 30 yards out. Aitken caught the ball with the utmost ease; in fact his misplaced confidence proved his undoing, for the ball  bounced out of his hands and over his should and into the goal. Rankin laughed heartily, so did the crowd, but no one dare ask the boy goalkeeper what he thought about the fun.

Costly mistake.
That was one Liverpool mistake that cost a goal. They lost another goal for a different reason. Tommy Lucas fouled John Bruton when within the penalty area. At that time the score was 3-2 for Liverpool. After that the score was 3-3. I am not going to urge that the score would have remained 3-2 for Liverpool to the end, but all the same it was throwing a chance away, and Lucas should be informed officially by his club that penalty kicks sometimes cost points.

One of the Liverpool gals was also the indirect outcome of an unusual happening, Binns followed the ball out of goal until it went outside the penalty area, but there was no doubt that both the ball and his hands were out of bounds.

Hodgson’s goal.
The ensuing free kick did not directly produce a goal, but from the corner kick that followed Whyte failed to get at the ball, and the result was that Hodgson uncovered, had merely to slide the ball into the net.

Taking a broad view, I am of the opinion that the Rovers proportion should have been more than one half of the goals. They had all the play in the first half, as even the most rabid partisan of Liverpool could but admit, and yet they failed to make the most of the attack.

Liverpool possessed a fine defence, one of whom was but a lad in in his teens, who was making his debut in first-class football. Aitken certainly lost his side a goal unnecessarily, and his error unnerved him for a time, but his display was distinctly creditable. He took some risks in coming out, but he was nimble enough, and I should say the Liverpool club need not worry about selecting him again.

He had a great little pair of full-backs in front of him. Jackson is the most unorthodox first-class full back I know. His methods seem erratic, and he does not appear to be very polished, but it is a fact that advancing forwards are dispossessed of the ball when least expected. Nor does he appear to use much physical force to assist him; yet he appeals to me as one of the soundest defenders in the country. Why should he imitate, others?

McDougall shines.
Lucas was equally safe and will probably go on as long as Donald Mackinlay did. He is not exactly speedy, but he is a fine positional player.

Liverpool also possessed the best half-back on the field in McDougall; indeed he seemed to be more of a forward than a half, or shall I say he was a half-back and forward combined.

The substitutions of Scott for Smith as leader of the attack did not weaken the side, for he was as good as any forward. Macpherson also made a good impression on me. Hodgson was starved in the first half, but Hodgson gave him plenty of opportunities to shine after the interval, and shine he did.

Blackburn people seemed to be disappointed with the display of their team. Certainly they should have obtained a substantial lead in the first half, but hey were rather unfortunate in their shooting. They had their best team out except that Whyte took the place of Jones, but I cannot truthfully say that Whyte rose to the occasion. However, I am not going to pull the team to pieces merely because they did not win. 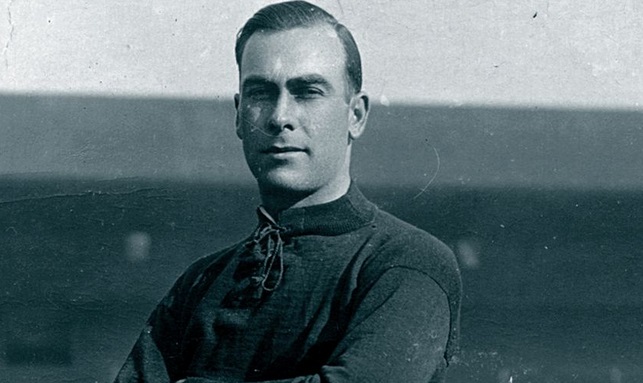