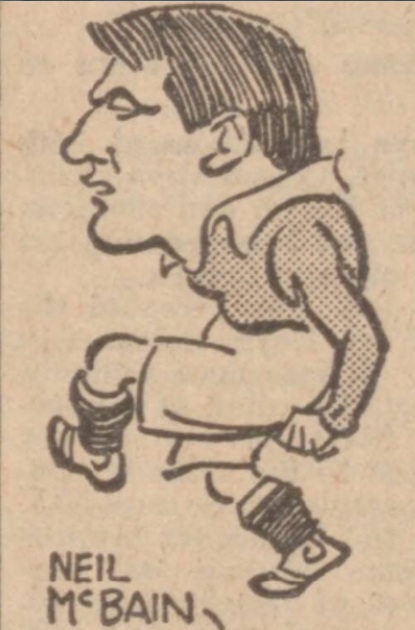 Thursday, November 2 – 1933
It was a happy thought which prompted the officials of Aylesbury United FC to invite players and officials of other clubs in the district to attend a lecture on Thursday evening week at the Club’s headquarters, the King’s Head Hotel, Aylesbury.

Upwards of 100 people listened to a lecture on “Tactics,” delivered by that well-known Scottish international, Neil McBain, who is manager of Watford FC, and has formerly played for Everton and Liverpool. It was Mr. McBain’s first public lecture, but by simple language he explained the various tactics which should be employed by each player in a team. Long years of experience has placed him in the ranks of the critics, and his observations should prove of a helpful nature to the amateur footballer.

Mr. F.A. West, chairman of Aylesbury United, presided and heartily welcomed the speaker.
Mr. McBain, after commenting on the “wonderful attendance,” commenced his talk by referring to the goalkeeper.
“I think he is the most protected man on the field, from a referee’s point of view,” he said.
A goalkeeper should always have a good understanding with his backs; he should never lose touch with the game, and always have his mind on the game. He should make certain that when he gets the ball he should lift his head until he can clear it. If he can’t clear the ball he should push it behind the post for a corner. A goalkeeper should never try and catch the ball if he is harassed; he should, if possible, fist the ball towards the touch line. Above all, he should use his tongue, and there should always be an arrangement between the backs and the goalkeeper. If kicking against the wind he should take a full kick at the ball; he not pick it up in his hand from the back. Also he should try to get the ball towards the centre line and more to the touch line. Also he should take the necessary steps to move a colleague who obstructed him when a corner kick was taken.

Dealing with the backs, Mr. McBain, said a back should have a real, sound understanding with his wing halves, more so than with the centre half. The work of the defender was to get the ball clear at any cost. It was not always the fastest mover than won, but the work of the fastest thinker. It was always the recognised thing for one of the backs to be at angles with the other, so if anything happened there should be a man there to cover up.

Mr. McBain finally dealt with the attack, and he said that a winger should never be idle. He should watch the game; he had a better chance of doing that than any other player. His duty should be to find the open spaces; to let it be behind the half back against him or in the middle of the field between the full backs.

In relation to the inside forwards, Mr. McBain said there was always a lot said about the “W” or any other formation. He said it did not matter which formation was adopted so long as it was understood. Personally, he liked to see the inside forwards a couple of yards or three yards behind the other forwards, but it was always the duty of the inside men to do the fetching and carrying. Furthermore, he should vary his passes and find the open spaces. This was the one of the secrets of the game. That being so, his colleagues knew that they had only to move into the open spaces to receive the ball.

It was also the duty of the centre forward to find the open spaces, and he would never advice a centre forward to hang on to the ball too long, unless he was absolutely forced to do so, and that was very rare. He should move the ball to his colleagues and get himself into a clear position. Furthermore, there was nothing like getting defenders on the run, but if a centre forward dwelt on the ball he was stopping the progress of the game.

On a dry ground, he thought short, snappy passes were the most profitable. If a player wanted to get over the ground quickly, the long pass was the best, but if they wanted to move accurately he maintained short passing was the best. Players must be on the move, and they should make the ball do as much of the work as they possibly could.

The best man was the one who did not kick the ball away at random, but who passed the ball to someone who got it. One of the secrets of football was to move the ball with the minimum amount of effort.

Summing up, he said the idea was to cut out individualism. There should be eleven men playing as one, all kicking one to another. The greatest way was by word of mouth, and the way to gain ground was by finding open spaces for the ball all the time.

The other men had got to know that the ball was going to find the open spaces, and they should be in a position to receive the ball before it arrived.

Offside tactics were the bugbear of the game, he said, but they had got to put up with them. However, he would rather favour a zone area for being offside, say 18 yards to 25 yards from the goal line. It was up to the attacking player if he could see for a moment that an opponent was going to throw the other forwards offside, to hang on to the ball and travel with it until he could find something to do with it. It was up to his colleagues to shout to him to take it on himself, or if one of his colleagues moved into an offside position to tell him to move back.

After Mr. McBain had given a short account of his career, and stressed the importance of continuous training, the meeting closed with special thanks to the lecturer for his able address.
(Bucks Herald, 10-11-1933)