Although the Football Club of Austria played clever football at Anfield yesterday the superior skill and more forceful methods of Liverpool brought the League side a 4-2 victory.

The English club were leading 4-1 ay half-time, but feel away badly in the second half. The Austrians had full opportunity in this half to reveal their machine-like approach work, but once again their inability to shoot well spoilt their efforts.

Several of the Austrian side that played at Highbury were in yesterday’s side. The visitors found themselves playing under new conditions, for the Anfield ground was covered with snow, and some of the Austrians wore gloves.

Liverpool opened strongly, their footwork being delightful to watch. Hanson missed an open goal from Nieuwenhuys’s centre before Riley handled from Sindelar.

Only four minutes after the start, however, Hanson, following some good work by Nivvy, sent across a shot which was turned through by English after Billich had beaten the ball out.

Liverpool increased their lead after twelve minutes through Nieuwenhuys after brilliant work by Hanson. The latter also paved the way for Liverpool’s third goal a minute later, English diving along the ground to head home Hanson’s centre.
Austria attacked strongly, Riley making brilliant saves from Sindelar, Stroh, Viertl and Molzer. Three corners were forced in succession before English raced through on his own to score Liverpool’s fourth goal.

Despite their setbacks, the Austrian attack was magnificent, Riley making save after save, but the visitors’ defence was too easily thrown out of position.

Viertl was the live wire in the Austrian attack, his runs being electrifying. He beat five men in a glorious dribble to cross a low centre to enable Sindelar to score an easy goal.

A great change seemed to have come over Liverpool on the resumption, and little was seen of them except from a defensive standpoint, but the Austrians failed to crown their brilliant approach work with effective shooting.

Liverpool offered a stout resistance, Riley being an outstanding figure, but the Austrians dominated the exchanges, though Hanson had a goal disallowed through English being offside. Towards the end Sindelar reduced Liverpool’s lead following a fine combined movement.(Daily Mirror, 14-12-1933)

The story of Matthias Sindelar is quite amazing, and worth a read. In later years he has been voted in as one of the world`s best footballers of his time. Unfortunately he met a tragic end to his life during the World War 2. You can read more about Matthias Sindelar here. You can also read The Guardians story “Sindelar: the ballad of the tragic hero,” here. 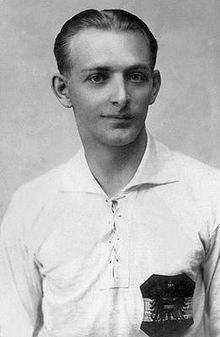