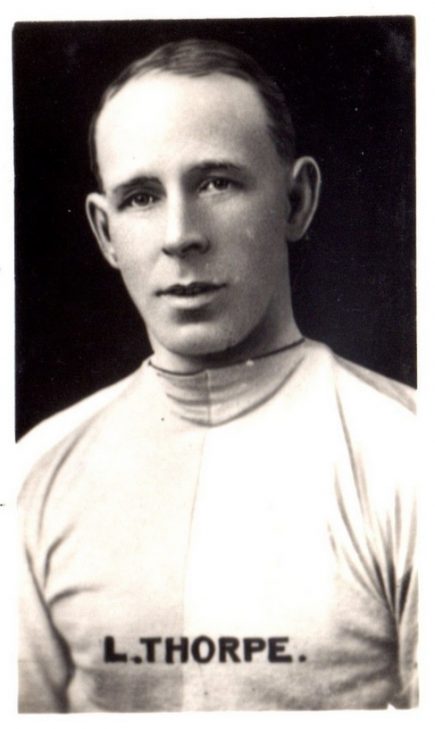 February 26, 1935
A brave fight against a long illness ended yesterday in the death, at his home in Grasmere Road, Blackpool, of Mr. Levy Thorpe, the former Blackpool, Burnley, Blackburn Rovers, Lincoln City and Rochdale wing half.

Thorpe’s services to the game, at a time when players did not receive such substantial payment as they do now, caused the Blackpool club to organise a benefit match on his behalf twelve months ago. The game was between Blackpool and a joint team from Blackburn Rovers and Burnley.

Thorpe went to Blackpool in 1912, being signed by the seaside club from Seaham, a North-East Coast junior club. Two years later he was transferred to Burnley, and was twelfth man in the Burnley team which won the FA Cup in 1914.

During the time that the late Herbert Chapman was manager, he assisted the old Leeds City club.

After serving in the war, Thorpe went to the Blackpool Convalescent Home at Square’s Gate, and when he was fully restored to health the Burnley club recommended him to the Rovers. The Rovers signed him, and never regretted their decision. At that time they were in serious danger of relegation, and Thorpe’s introduction into the team was partly responsible for them escaping descent to the Second Division.

Thorpe played 40 games for the Rovers in 1920-21 season, when he was captain, and 34 games in the following season. He played for the English League against the Irish League, at Belfast, on October 21, 1921.

Later he was transferred to Lincoln City, where for a season he acted as captain, and his last club was Rochdale. It is over twelve years since he played in senior football.
(Burnley Express: February, 27, 1935)