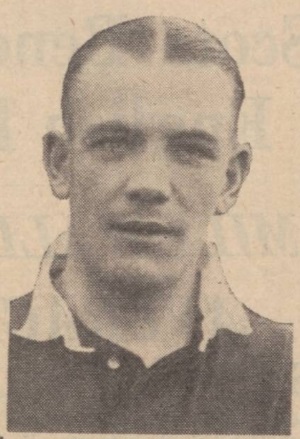 November 3, 1939
The match of the stars in the titbit of tomorrow’s football fare.
Goodison Park is the scene of action. Twenty-two of the finest footballers in the British Isles will trot out to engage in the first war-time international – a match between The Football League and an All-British eleven.

There will be 20 full internationals on view, and I doubt whether in the history of the game – and that is covering a long period – there have ever been so many famous players in one match.

The proceeds – and that includes sales of the programme – will go to the Red Cross Fund. The officials – and primarily Mr. William Cuff, president of the Football League, Mr. Ted Robbins, secretary of the Football Association of Wales, and Mr. Theo Kelly, secretary of Everton – the Everton club, the stewards, the members of the Cheshire Line Band, the match controllers, and more important than those, the players, are giving their services free.

Here is a chance of seeing a football classic and at the same time doing something for a wonderful cause.

Five Merseysiders.
There will be give Merseyside favourites on parade. They are Arthur Riley, of Liverpool –getting an honour which has been too long delayed – and Joe Mercer, Tommy Lawton, Tom Jones and Torry Gillick, of Everton.

Lawton, of all these local lads, is the only one figuring in the League side, and he will be opposed to his bosom pal, Tom Jones.

Lawton will have the backing of two of the finest inside forwards in the land – Raich Carter and Peter Doherty, while winging it with the League will be the scintillating Stanley Matthews, and the dynamic Eric Brook.

On paper, it looks as if the League side is the more potent attacking force, but I think the All-British side have the more formidable defence.

The two Ellesmere Port boys, Mercer and Cullis, will be the captains, and Mr. Frank Percy, of Liverpool, will be the referee.