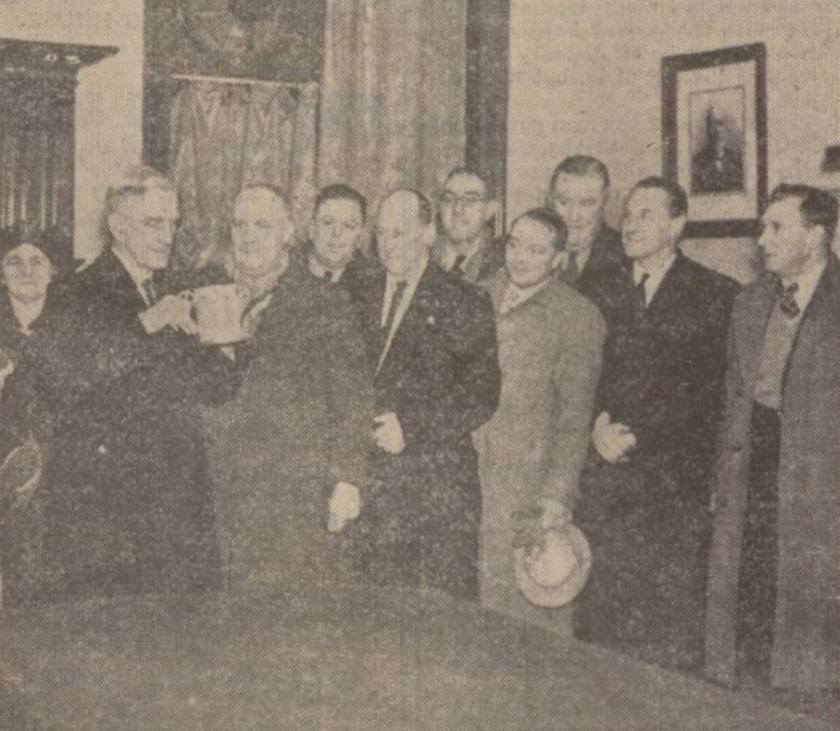 January 2, 1940
Liverpool and Crewe must have been sorry to put forward their sectional fixture. Still, although the New Year’s Day attendance fell short of expectations, there was nothing short about the football ration. It was a fine match, and Crewe earned praise for taking a hefty beating without a murmur. There are sides, of course, who would have cut up rough with consequent dangers to limbs.

Actually 7-3 was not quite a fair verdict to the ex-Thirds. In my estimation they deserved a penalty, in addition to which Eric Mansley made one superlative save, and a Leo Stevens’s shot struck the goal frame. There is no reason why crowds should not desire to see such football. I daresay, when the weather becomes more favourable, there will be a fresh recall to football grounds all over the country if such standards are maintained. But it is essential that every player is a goer from start to finish.

True to tradition the clubs drank the King’s health in the Sir Francis Joseph loving cups. But it was not champagne this time. I could not help recalling the same day a year ago when Liverpool were at Middlesbrough and everything was absolutely normal with no though of football ever being ko’d.

Carney, Liddell and Co.
The war has uncovered several players of great ability in this area. Liverpool have three whose first team appearances have been directly due to the great upheaval. First, Len Carney, the Oldham schoolmaster and former Collegiate player. When they played him at Chester early in the season he showed football feet, and a football brain, but his physique seemed to be against him. Since, he has improved with every match. Particularly has this been noticeable in his heading. At the moment he is a first-rate player well worth his position. He’s a nice type of player, too – clean and neat and “heady.”

Number two on the list is Sergeant Stanley Eastham, a bundle of energy at half-back or in the front line. Maybe he is inclined to be a bit “arty” at times, but that’s a fine fault, and we could do with more of his picture passes to all parts of the field and his obvious enthusiasm for the game. He is quite a personality in the side now.

Third, is the mere boy – Billy Liddell – whose first team work in three matches on left and right wing has proved my contention that he was Liverpool’s best prospect. I only wish Tranmere had played when they had the chance they might have persuaded Liverpool to let them have him, and gain experience with them – and doing them proud into the bargain. Liddell still has a lot to learn, but his strong, forceful two-footed heartiness makes him a player of infinite promise.

No comment on the game would be complete without reference to Berry Nieuwenhuys’ hat-trick from inside forward, or Matt Busby’s magnificently-taken headed goal, and Mansley, who seems to have filled out a great deal, once again pleased the club as being a fine type of goalkeeper to get – without fee.
(Liverpool Echo: January 2, 1940)

Councillor William John Harrop, chairman of Liverpool F.C., toasting the King in the Board Room, before the Club’s first match in the New Year. He is drinking the toast from a loving cup presented by Sir Francis Joseph, KBE. Also in the picture are Mr. Frank Cottrell (chairman of Crewe Alexandra F.C.), Sir Thomas Brocklebank (chairman of Chester F.C.), and fellow directors.
(Evening Express: January 2, 1940)