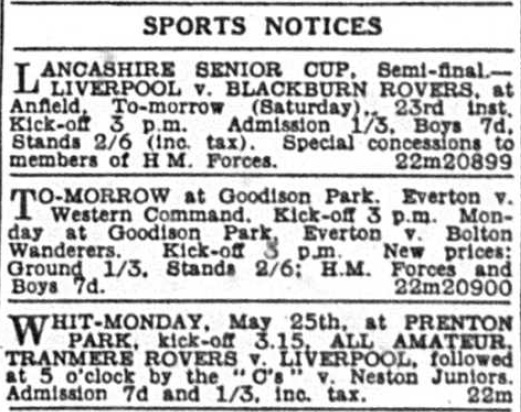 May 22, 1942
Tomorrow the major attraction is Liverpool’s Lancashire Cup semi-final with Blackburn Rovers, though Everton’s game with the Western Command runs it close, for the Army side is so strong that a first-class game is assured.

Taking the competitive side first, if Blackburn put up as good a show as when they were last here, Liverpool will have all their work cut out to get the better of them. It is to Liverpool’s advantage, however, that the Rovers will be minus Robert Pryde at centre half, for he is the mainstay of the visiting defence, which all along has been their strongest link.

Another point in Liverpool’s favour is the inclusion of Mutch and McLaren, Preston’s inside forwards, who have been loaned by the Deepdale club, North End having no match tomorrow. While the sudden insertion of two newcomers into an attack with which they have had no previous experience may not always work according to expectations, in this case I think we can look for a definite gain.

The inside wing positions have not always been Liverpool’s brightest point, but in Mutch and McLaren they have two players of craft and skill and sufficient adaptability to quickly dovetail into the Anfield scheme of things.

Done should get more chances than usual, and if he will check the tendency to fall into the offside trap – and Blackburn are adepts at setting it – he may reap a good harvest.

Intending spectators should note that ground admission is now 1s 3d, the new tax having come into force. If you tender the exact money it will help to avoid delays at the turnstiles.