Wrexham’s grit
Chairman Mr. Bob Smith and Secretary Manager Mr. Wilf Wild, of the City, expressed envy at the fine support given our clubs by the public, but when I went to Anfield on Saturday for the Liverpool – Wrexham game, Chairman Mr. John Hughes of Wrexham, who came with a number of old friends, including Mr. Herbert Pritchard, and the two Messrs. Tom Williams expressed not envy but delight.

There were 14,461 people there to welcome them and provide a share in a gate of £937. Well, these enthusiasts from Wales deserve a rich reward. They are among the grandest people I know in football. Their players were a credit to them, too, for Wrexham made a host of friends in earning their precious point.

Wrexham were the personification of grit and forceful football. Their tenacity in going to the ball completely upset the Liverpool attackers who, used to scoring freely, could not carve out the openings with customary facility and who, in desperation, lost positional sense and overcrowded late on to become aids to Wrexham.

McNee placed Wrexham in front with a goal some Red fans thought offside, but which was quite legitimate for Bush was playing on the scorer. Hulligan struck back only to see his goal disallowed, and a penalty awarded. Dick Dorsett, of all shooters, blazed high over and so Liverpool not only turned around in arrears but lost another goal to Moore, before a second penalty gave Fagan a chance to reduce and then Hulligan got his reward with a headed equaliser.

In the end a fair result, for Liverpool were pressing for fully 80 minutes, and had it not been for a super display of goalkeeping by 19 year-old Wrexham home product, Norman Jones, must have won. Jones, just home on leave from the Army, was magnificent. At Anfield they know good goalkeeping when they see it, and when I tell you that the Kopites rose to Norman you will appreciate what a high level he reached. And in front of him half backs Jones and Lloyd playing full back, and Plymouth’s Stuttard were brilliant. Stuttard was the chief stumbling block to Liverpool’s hopes and aims.

Prior to the interval Wrexham gave rather more than they took, in fact much of their combination was delightful to the eye and upsetting to Liverpool who suffered by the slowness of Bush, so that Kaye and Pilling had to keep covering him, and forsaking their customary role of providers for the forwards.

This was Liverpool’s first game with red stripes on their knickers but it is not a new Anfield fashion. They were just borrowed pants as their own had not come back from the laundry.
(Evening Express, 28-12-1942) 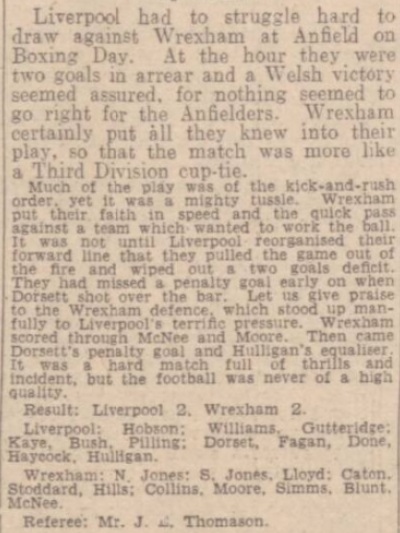