Monday, January 4 – 1943
Liverpool have made their second professional signing in the space of a month. Arthur Shepherd, the 19-year-old reserve centre-forward, put pen to paper yesterday. Michael Hulligan signed professional a couple of weeks ago.

Shepherd is Liverpool’s leading scorer in the Liverpool County Combination, despite the fact that he is now in the Royal Marines and appears only on odd occasions. The lad is 5ft. 9in. and 12st. 4lb., and there is no doubt that he is a youngster with a future.

Shepherd is the son of an old footballer, for his father played for New Brighton. Arthur went to Townsend-lane School, Liverpool, and was in the school eleven. Later he played for Norwest. Baseball is also one of Arthur’s sporting pursuits. He used to play for Carlton.

It was at the start of the 1940-1 season that Shepherd threw in his lot with Liverpool, and in his first six games with the club this season scored no fewer than 14 goals. 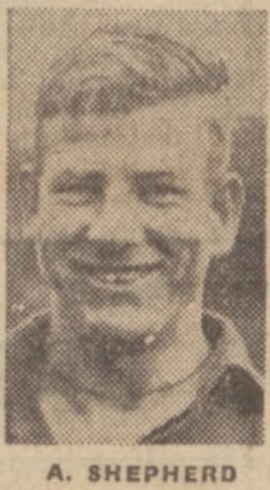