December 1, 1945
Key note: “The Liverpool’s trainer’s room was like a casualty clearing station after Saturday’s match. It wasn’t a dirty game, and the resumption of bonus was not responsible. It just happened that there were more hard knocks than usual in a match fought out with rare pace and keenness, and when I looked into Albert Shelley’s domain Hughes, Kaye, Liddell and Lambert were all having attention. This game will go down in Anfield history as ‘Liddells match.’ His speed was amazing; his shooting the last word in power and accuracy, whether left or right foot, and his unorthodox wanderings had the Huddersfield defence on toast. In addition to his own two goals he made one each for Fagan and Balmer, gave young Baron one, which was disallowed – here I thought Referee Wright was wrong – and again showed that he is the most deadly winger in football to-day.

Liverpool won this game because they did what Huddersfield fought shy of – shot every time they had the slightest opening. The visitors played some nice football, but failed to round it off in the appropriate manner. They fiddled and finessed when a shot was called for, and thus ruined most of their work for such tactics played right into the hands of Liverpool’s quick and hard-tackling defence. The game had its lessons for Liverpool. First is that Taylor is not ideally cast as a winger; second that Baron though he has plenty of promise has a lot to learn; third that McInnes is worthy of a regular place, and fourthly, that Hall, agile and full of pluck as he is, is not the complete answer to the goalkeeping problem.” (Liverpool Echo: December 3, 1945) 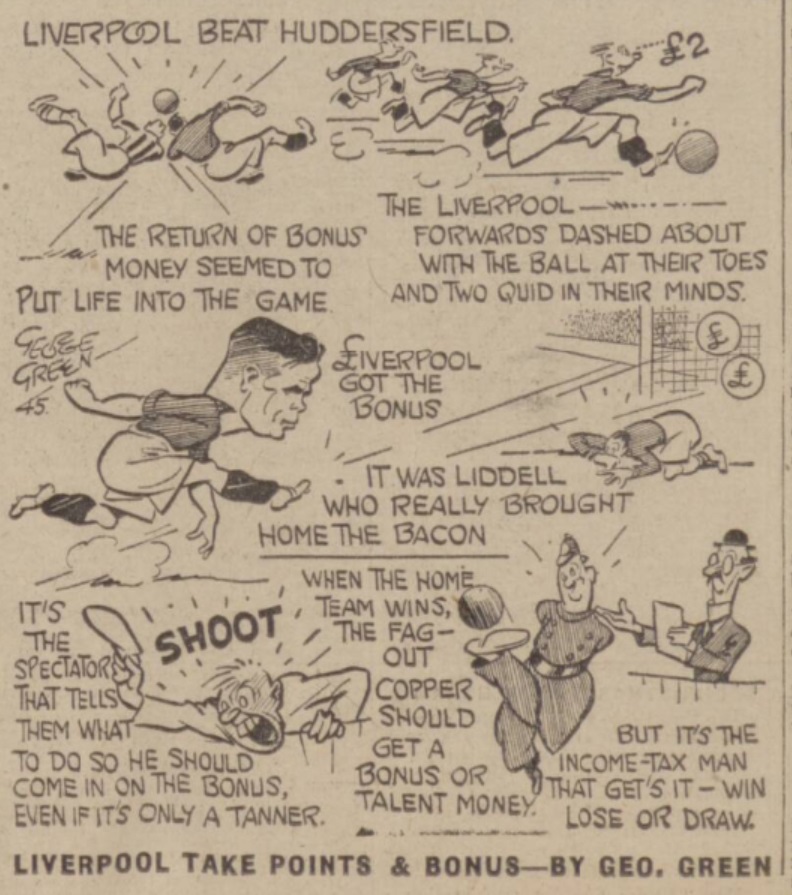