Wednesday, September 12 – 1951
Burnley-born Mr. General Stevenson (77), 41, Federation-street, Barnoldswick, must possess more medals for football than most men in the North of England. During his career he collected over 100 medals, six silver cups and two caps.

The following season he joined Liverpool at 15 years of age (*) . After only one season there Mr. Stevenson joined Barnsley, and was captain of their team for two seasons. Next he went to Millwall, and was captain there for seven seasons.

It was while he was with Millwall that Mr. Stevenson gained eminence in the world of sport, being capped in the season 1903-04 an 1904-05. Newspaper cuttings kept by him testify to the popularity of this scientific left back.

After he had ceased his playing days with Millwall, Mr. Stevenson went to Accrington Stanley for two seasons, and then finished his career by becoming coach to Haarlem F.C., Holland.

His son Arthur, is a former manager of Padiham F.C. where his father started his career. Arthur also played for Barnoldswick in 1931, and later appeared on the left wing for Sheffield United and Bristol City.
(Burnley Express, 12-09-1951)

** Note: Unfortunately the newspaper got some years wrong. Joining Padiham in 1888, should be 1896, and joining Liverpool when he was 15 years old should be 23 years old. 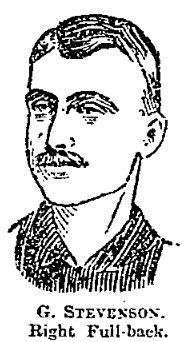