January 1, 1953 kjehan Footballers A to Z, Liverpool F.C. A to Z Leave a comment

All articles about John Givens on PlayUpLiverpool.com;

About John Givens:
“John Givens is considered by many competent judges to be one of the best en in the provinces. He is captain of the Dalry club, and is certainly at present the mainstay of the team. As a right or centre half-back he is difficult to beat, and is equally at home in the front rank. Though only 25 years of age Givens has played a lot of football, and besides Dalry he has assisted Kilmarnock, Liverpool and Abercorn. On the ball Givens is very smart, and wit him placing to the forwards is by no means a lost art.” (Scottish Referee: January 29, 1897)

Position: Inside right, later right half or centre half.

Note:
From my good friends at http://www.scottishleague.net/forum I have received the following help re. Givens:
With Dalry his name is recorded as Givens, with Abercorn it is Given, and in both cases his address is North Street, Dalry. From that I can identify him on ancestry as he was living there in census returns, but the spelling of his name differs every time:

He crops up in a few family trees, again with varying spellings. One of these says he died in 1894 which is obviously wrong and the consensus is he died in 1953, but no location provided. 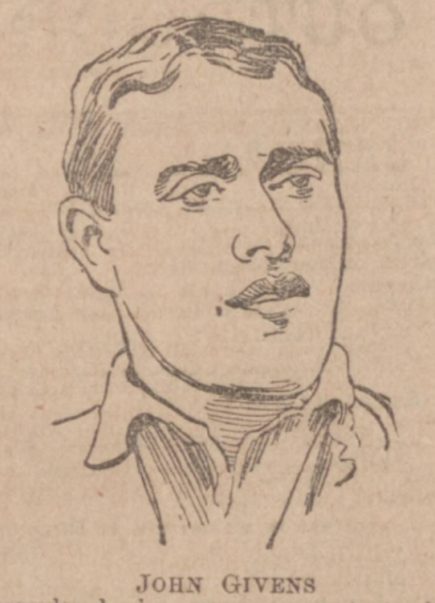