December 11, 1953
It will be no “push over” for Pompey at Fratton Park when they meet Liverpool tomorrow. The Merseysiders, too, were among those lowly teams who caused such League surprise last week. Fortunately, there is no feeling among the Fratton Park players that here are a couple of points for the taking.

The West Bromwich result has restored a healthy confidence, but it has not blinded the team to the fact that the games lying ahead will be really stiff ones, and that every effort has still to be made if their League position is to be improved.

Despite their recent decline which is causing concern in their area, Liverpool shape well at Fratton Park. In their past three visits they lost 1-3 last season, and won 3-1 on the two previous occasions.

The Reds think they have solved their difficulty by the introduction of Barry Wilkinson, 18 year-old former Bishop Auckland right half, and Alan Arnell, 20 year-old Sussex County FA centre forward, of Worthing and the switching of Jimmy Payne, the normal outside right to inside left.

Both Wilkinson and Arnell who are in the Services, did exceptionally well against Blackpool, Arnell scoring the third goal.

Better record.
Their own tonic 5-2 win against Blackpool, was gained at home, it is true, but, nevertheless, it was convincing enough.

Liverpool’s League position is a shade worse than Portsmouth’s.

Thus, here is a game, if ever there was one, where a team can improve their League position considerably by pushing their opponents further into the mire. It is likely to prove a grand battle.

Naturally, the odds favour Portsmouth in this grim struggle towards safety. They now have a defence which has shown itself capable of holding the best in the land.

But in nine away games so far this season, the Liverpool defence has conceded 29 goals. The attack has scored only seven. This record should certainly give cause for Pompey encouragement.

If there is one factor, however, which I believe can well prove a match-winner tomorrow, it is the crowd. I wish many of the “carpers” could have been at The Hawthorns last week.

An inspiration.
Portsmouth found themselves fighting not only a team whi has held the lead for the greater part of the season until then, but against the cheering of an enthusiastic crowd who set ip a roar which must have been an inspiration to the home team.

And during that five minutes when West Brom were eradicating Pompey’s 2-0 lead that roar had to be heard to be believed. In fact, I have heard nothing like it since England were being cheered on against the Austrians at Wembley in 1951.

Cannot the Fratton Park crowd do that for Portsmouth tomorrow? Let the “Chimes” be heard in a big way right from the start.

A correspondent recalls these championship seasons when the “Chimes” were being sung by thousands at every match, before and during play. The Pompey players themselves were the first to admit of their inspiration.

Liverpool have not had a happy season. They have been hit by injury, loss of form and repeated team changes, and have failed to break the unhappy spell of 16 consecutive away defeats.

Let us hear “The Pompey Roar” at Fratton Park tomorrow, to make sure that this sequence is not haltered at Pompey’s expense. 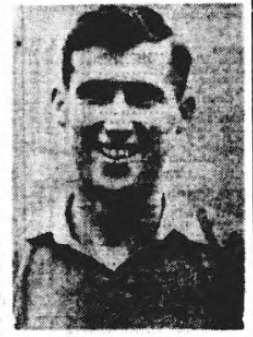 Alan Arnell, the 20-year-old amateur centre-forward of Worthing, leads the Liverpool attack. A former Portfield and Chichester City player, he is a Corporal in the Orderly Rooms at Chichester Barracks.

Barry Wilkimson, an 18 year-old amateur who formerly played for Bishop Auckland, has his second game for Liverpool at right-half for tomorrow.
(Portsmouth Evening News: December 11, 1953) 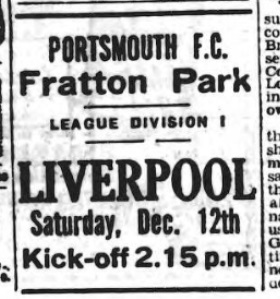