August 11, 1955
The death has taken place at Birmingham of Bert Freeman the former Everton and England international centre forward and the man who scored the goal for Burnley when they defeated Liverpool in the Cup Final of 1914 at Crystal Palace.

Before the first war, Bert Freeman was one if the finest centre-forwards in the country with his twinkling feet and rather curious gait he was a terror to opposing defenders and was frequently leading marksman for his club.

Freemam started his football career in junior circles in Birmingham, later spending a short time with Aston Villa and Arsenal before joining the Goodison club. It was a big surprise in 1909 when Everton allowed him to go to Burnley.

He remained with Burnley for eleven seasons and then joined the old Wigan Borough side in 1920’for a short spell.

While with Burnley he played in over 300 games, including war-time football, scoring 174 goals.

He played for England on five occasions prior to 1914, two of them while with Everton.

Bert who would have been 70 next year leaves a widow, son, and daughter.

This article was found at Billy Smith’s Everton page – The Blue Correspondent. 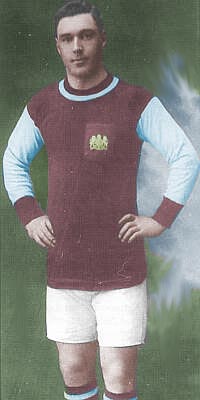