February 21, 1961
An office colleague, Mrs. Amy Gibson, has unearthed a remarkable file of sports magazines; “Out of Doors,” published in Liverpool in 1892. The material photographs and sketches are fascinating. Here, with sketches is what the first issue said of the original Goodison Park – a vastly different place from the palatial one we know … it cost £3,000 which represents something less than a club would pay nowadays for a very ordinary reserve team player.

“Out of Doors” began: –
“Behold Goodison Park. The half-dozen pictures we give of this splendid enclosure must serve instead of a long description of it. In any case to substitute pictures for words is our mission in journalistic life. At the same time no single picture could take in the entire scene the ground presents; it so magnificently large, for it rivals the greater American baseball pitches. On three sides of the field of play there are tall covered stands and on the fourth side the ground has been so banked up with thousands of loads of cinders that a complete view of the game can be had from any portion.

“The spectators are divided from the playing piece by a neat, low boarding and the touch-line is far enough from it to prevent those accidents which used to be predicted at Anfield Road, but never happened. In the centre of the banked-up portion, but set against the walling of the ground is the secretary’s office where Mr. Richard Molyneux can sit ether to write out cheques in his easy chair or keep his eye on the uttermost extent of his vast dominions. The chairman (Mr. George Mahon) when play is on is accommodated exactly opposite and under his seat which is in the centre of the large stand, is a door leading to a passage and this is the handy way the players and referee in when the game is over, and at all events the latter personage can bid defiance to the angriest crowd. This is superfluous however, as Goodison Park spectators never throw missiles at the referee, for there is no better disposed crowd in the kingdom.

What, No Body Servant?

“Inside the room, the scene is as shown in our pictures, the bathroom are models of comfort and convenience. Each of the two-rooms (one for visitors and one for the home team) contains a large double bath, not with shallow, but with perpendicular sides. The latest patent in gas water-heaters is shown at the end by the window with the marble hand-washing bowls at the side of it. The floor is a trellis work of planed boards, arranged so as to give the maximum of comfort to the feet. The gas brackets are set off with opaque globes, which add a warm and pleasing softness to the scene; and even the shades above are of latest pattern. ‘Tubbing’ being over the player passes through to the adjoining dressing room which is which is large enough to give even the stoutest full back all the elbow room he needs – and more. The seats are inclined to that comfortable hollow which induces you to sit a little longer than is absolutely necessary; even the pegs for your clothes are of an attractive design and there is a kind of raised platform on which your body servant if you have one, can give you a rub-down.

“As shown in our drawing, there is a room again beyond this which can best be described as the place for ‘finishing touches.’  The referee has already been mentioned but a glance at the view of his room will show how he is provided for. It seems almost a pity there is not chance of a collar Rugby game on the ground for the room would stand a large amount of bombardment! But there are even further attractions for the august personage, for if he opens the outer door which is the middle one shown on the back of the entire stand he is face to face with the pretty girl who sells hot drinks. The stairs also shown in the same view lead exclusively to the Press stand and therefore the convenient way a busy reporter can run out with an urgent message is self-evident.

“Truly we might spare pages over this modern arena but space forbids. Suffice it, however, to remark an inspection of the strong and substantial foundations alone shows how carefully the whole has been planned and if it only cost £3,000, it is £3,000 well spent and Mr. Prescott, the architect himself a worthy footballer once by the way and Messrs Kelly Brothers the contractors may take all the credit for it they deserve. But the noble ground was not made with the simple wave of a magician’s wand. It is the outcome of much thought and study and Mr. Mahon and the many willing co-workers he had can now look upon the result of their efforts with the utmost pride.” 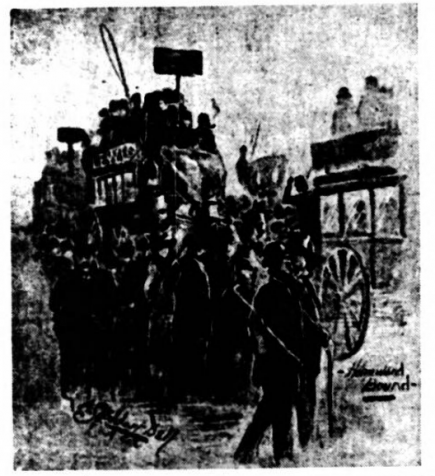