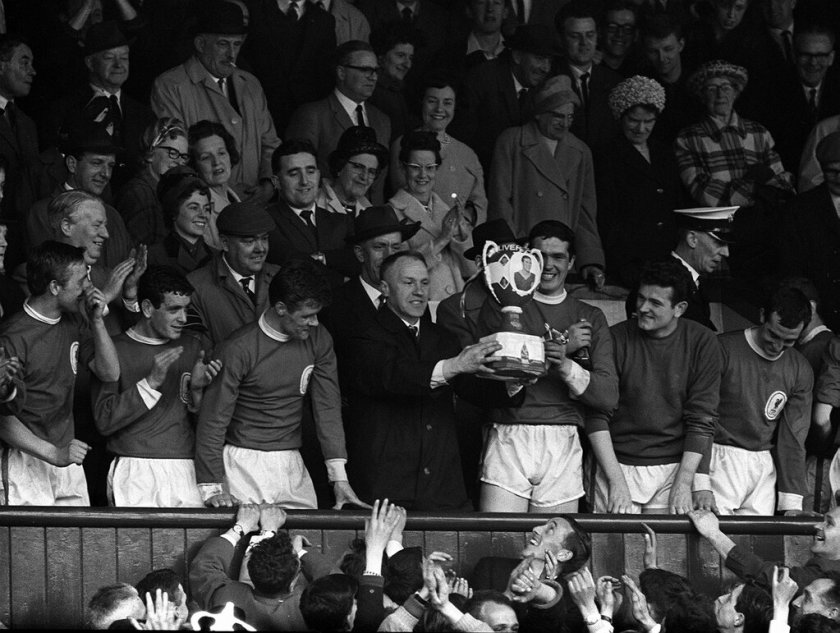 April 18, 1964
Key note: “The Kop set this match to music and sang their team to the championship with a wit and a warmth woven into the pattern of play so closely it became a part of the game itself. Liverpool fans don’t just watch a game. They take part. They live it. They entertained themselves for a full two hours before the kick-off with the twin chants of ‘Liv-er-pool’ and ‘Toppaa the League.’ They gave Arsenal a madly mixed reception. There was crude scorn for centre forward Joe Baker – sent off with Liverpool’s centre half Ron Yeats in the first match at Highbury. A special crescendo of applause for goalkeeper Jim Furnell, a former Anfield favourite. Then they forgot Arsenal, to concentrate on supplying that stiffened encouragement that stiffened and strengthened Liverpool through the edgy opening minutes. Left back Ronnie Moran could have caused disaster with a silly back pass in the opening minute, but for the alertness of goalkeeper Tommy Lawrence. The same Lawrence who, only a few minutes earlier outside the ground, had told me:
‘We know we will probably win the title no matter what happens in this game. But we don’t want that. We want to win it ourselves. Here. Today For THEIR sake’ – and he jerked a thumb in the direction of the Kop. The same Lawrence who, in the 29th minute, swooped on and swept away a George Eastham penalty that would have wiped out the 7th minute lead centre forward Ian St. John gave Liverpool. Lawrence was immediately rewarded by the Kop with a chorus all to himself. ‘Ee-aye-Addio, Tommy saved a pen.’! As it died away, Arsenal died with it. They were up against something they couldn’t comprehend. Not just a team, a whole city, singing songs of praise to themselves. From that twenty-ninth minute penalty save, victory for the Kop was certain. So certain that when an appeal over the loud-speakers at half-time called on the fans to stay off the pitch at the end to give the players room for a lap of honour the Kop roared its ribald approval of that confidence. Even though the score was then only 2-0 – outside left Peter Thompson and St. John combined to lat on a goal for inside left Alf Arrowsmith in the thirty-eight minute – they knew Liverpool would win. Everything that was happening underlined it. Arsenal drifted dispiritedly out of the hunt. And Liverpool winger Thompson was a revelation. At last he has learned the lesson of when to run, when to part, when to shoot. He literally hammered home part three of that lesson with two great goals in the 53rd and 57th minutes. When Thompson unselfishly gave up the chance of a hat-trick to pass to a better-placed inside right Roger Hunt, Liverpool got their fifth. And this goal had the crowd assuring Liverpool what they must have already known. That when they stride into Europe next season they’ll never walk alone. The applause rapped out like an artillery barrage – and I’m not exaggerating. I only wish the whole Kop could have been there with me afterwards when the final chorus was sung – by eleven men in a bath in the dressing-room. We’re the champ-i-ons, we’re the champ-i-ons. Ee, aye, addio, we’re the champ-i-ons.'”
(Copyright Daily Mirror: April 20, 1964, by Frank McGhee)