August 14, 1964
Peter Thompson, the Preston and England Under-23 forward, did not know he would be a Liverpool F.C. player to-day until he read of it in this morning’s papers. He was not consulted by either club last night in negotiations which went on for two hours and ended after midnight. But as he had stated time and again that he wanted to play in a First Division team preferably in Lancashire, there were no snags when he arrived at Anfield to-day to see Manager Bill Shankly and complete transfer formalities.

Thompson said after signing: “I’m delighted to be joining a club like Liverpool. I knew nothing about it until this morning. The last time I played in First Division football was my first season at Deepdale and Preston were relegated.”

Fans outside Anfield gave Thompson a great welcome when he drove in accompanied by a business associate who shared the company running caravans at sites in Conway, Rhyl and the Fylde Coast. He had to sign many autographs before the one which really mattered on the transfer form.

Manager Bill Shankly said: “I’ve known of Peter since he was a boy of 15 at Carlisle, but when I was at Huddersfield I had not the means of inducing him to join us. He’s a great player and I think he’ll do exceptionally well with us.”

Thompson, a pleasant medium sized young man who is dedicated to reaching the top in soccer – if Preston had still been in Division 1 he would have stayed with them – is unmarried. His father, a joiner and Justice of the Peace (J.P.), and mother still live in Carlisle. Thompson is a non-smoker and non-drinker.

The fee Liverpool paid was in the region of £40,000, some £10,000 more than their original offer. The deal had hung fire for weeks because Preston would not name a figure.

Chairman Thomas Valentine Williams said today: “Yesterday at mid-day we had no intention of seeing Preston about Thompson. We had told them time and again that we would not do business until they named a fee.

“In mid-afternoon we learned that Preston would be a playing a friendly last night against Blackburn. We thought we would take a chance and go to Deepdale to see what they had to say. I told their chairman, Mr. J.H. Ingham: “Our visit will be a waste of time if you don’t name the sum you want.”

Two-hour talks.
“After the game we conferred for more than two hours. Preston gave us a figure and we worked on the deal from there. The player cannot have known anything about our visit or the imminence of his transfer until he read it in the papers this morning. He should suit us very well. He was the man, you remember, whose goal put us out of the FA Cup two seasons ago in a second replay against Preston at Manchester.”

All Liverpool followers will be delighted their team have “made up” their attack in time for the start of the new season a week next Saturday. The man disappointed at Liverpool’s success in signing Thompson is the former Everton manager Cliff Britton, who discovered Thompson when the lad was a Carlisle boy footballer. He was at Preston last night trying to get his old protégé to join him at Hull City.

Thompson, needed to Anfield as an outside-left, has not played in that position for more than 18 months. He was on the extreme wing in the famous Cup games against Liverpool two years ago.

Young attack.
Thompson is 20. He will help to complete one of the youngest forward lines in the First Division and certainly the youngest ever to represent Liverpool for many years.

Liverpool’s quest for Thompson began when Mike O’Grady, the Huddersfield winger, re-signed for his club in mid-July. Their initial offer for Thompson was £30,000; this was topped by Hull City and Cliff Britton who bid £35,000.

In November two years ago, Everton were reported to be ready to pay £30,000 for Thompson, but when their overtures were turned down they lost interest.

Mr. Harry Catterick has said within the last week or two that his club had no interest in Thompson.

Thompson has been on month – to – month terms at Deepdale since his old contract expired. He told his club we would not re-sign for them because he wanted a move into First Division football, preferably in Lancashire.

Thompson has not missed one of Preston’s last 136 matches. He made his League debut at Preston when he was only 17.
(Source: Liverpool Echo: August 14, 1964) 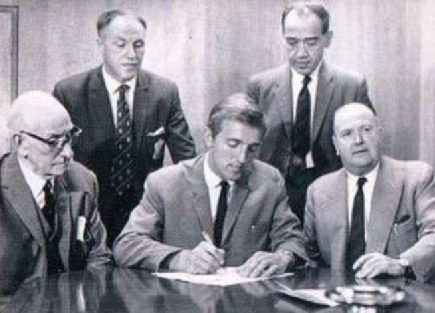 Liverpool’s new signing, Peter Thompson, was mobbed by autograph hunters outside Anfield football ground this morning when he arrived to complete his transfer from Preston North End.